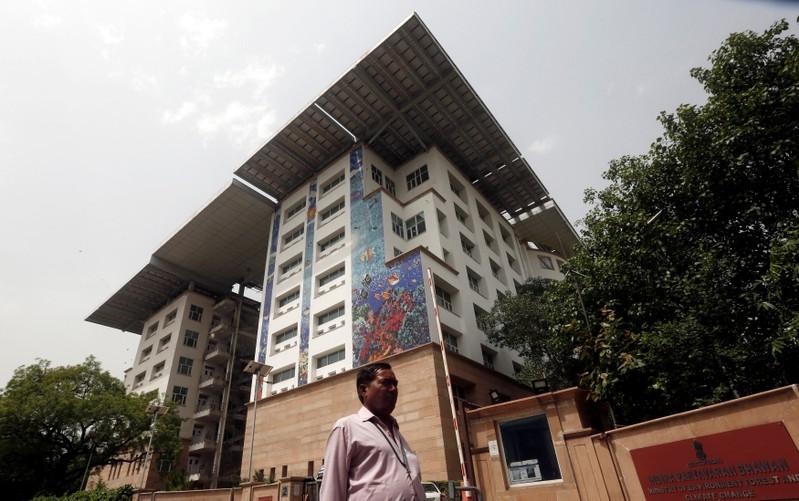 PEDAVEEDU, India (Reuters) – India is fast-tracking environmental clearances for projects like power plants and coal mines in a bid to propel growth, setting off alarm bells among environmentalists and affected residents who say the decisions are being made too quickly.

A man walks past the Ministry of Environment, Forest and Climate Change in New Delhi, May 17, 2018. Picture taken May 17, 2018. REUTERS/Adnan Abidi

In a country where state machinery typically moves slowly, the environment ministry under Prime Minister Narendra Modi has slashed the average time taken to grant clearances to 170 days from 600 days, said two government sources with direct knowledge of the matter.

“We’re standardizing processes and taking decisions swiftly,” said one of the officials, who did not want to be named, citing government policy. “We know the basic issues, and merely taking more time for approvals does not mean much.”

The environment ministry did not respond to requests for comment.

The push appears to be similar to U.S. President Donald Trump’s efforts to speed up infrastructure approvals – his administration has said it wants environmental reviews for major projects to take no longer than 21 months, instead of years.

India’s industrial sector grew at 4.3 percent last year but growth slowed from 4.6 percent a year ago. The speedier approvals come as some big-ticket infrastructure projects face delays, including the proposed $100 billion Delhi-Mumbai industrial corridor and the Japan-backed $17 billion bullet train.

Any loss of jobs from slowing growth could hurt Modi as he seeks a second term in 2019.

The PM10 index, which measures the concentration of particulate matter of 10 microns diameter or less in the air, hit 999 in the capital New Delhi last week, the highest measure on monitoring devices. This coarse particulate matter is mostly dust, which attaches to toxic material from other emissions.

A level of 500 is considered “hazardous” and people are advised to remain indoors.

The government halted construction activities in the capital and nearby cities to ease the pollution and by Friday afternoon it was at 124, although that is still considered unhealthy.

“The way in which in the last ten years government has allowed power plants to come up in the periphery of Delhi and its surrounding region is a major contributor to pollution,” said Sunil Dahiya, senior campaigner with Greenpeace.

Projects across the country cleared by the environment ministry this year include three new thermal power plants, a carbon black manufacturing facility, two cement plants and the expansion of four coal mines, according to government data.

“Faster clearances can certainly compromise the quality of evaluation,” said Srestha Banerjee, program manager at the private Centre for Science and Environment.

“By standardizing terms of references for various sectors the government has tried to reduce time in the environment clearance process. This is not a bad step. But in order to reduce time, it has exempted public hearing for some important sectors. This is extremely problematic.”

In India’s villages and smaller towns, protests are mounting against rapid industrialization because of the environmental damage.

The Lambada, a tribe in the southern state of Telangana, is opposing a 200 megawatt coal-fired power plant near the village of Pedaveedu that the environment ministry cleared in 78 days this year. Environmentalists say it usually takes at least six months to clear such projects.

The environment ministry did not respond to questions on the time taken for the approval.

“I won’t let this power plant be constructed,” said Mudavath Vui, a 60-year old Lambada woman dressed in a bright blue embroidered top with clinking bells and coins and colorful beads around her neck. “I have seen my husband die from cancer and I don’t want this plant to increase our suffering.”

Her community, which forms a major chunk of the population in three villages around the proposed site of the power plant to be built by privately held MG Power Projects, has also been opposing two large cement plants in the area that they accuse of triggering respiratory and other problems.

Groups of Lambada villagers frequently gather around Pedaveedu to shout slogans against the power plant.

They and activists said they plan to intensify protests against MG Power’s plant when construction starts. An MG official said the company is yet to firm up plans on starting construction.

Protests by villagers and local tribesmen have also erupted at Vedanta’s copper smelter in the southern state of Tamil Nadu, where 13 activists were killed in a protest last month, and at its bauxite mine in the state of Odisha.

Securing faster environment clearances has become crucial for businesses that have struggled to overcome the chaotic implementation of a nationwide sales tax last year.

Gujarat Agrochem Pvt Ltd, an insecticides, chemical and herbicide manufacturer in the western state of Gujarat, secured approval in April to expand a plant after submitting its proposal at January-end. The speed surprised the company itself, its regional head Sunish Nair told Reuters.

Earlier this decade, the company had to wait two years to get the go-ahead to build a herbicide plant in Gujarat. By the time the approval came, in 2013, the project’s estimated cost had jumped 28 percent and demand for the particular product waned, Nair said.

“It seems they are now adhering to a fixed time-frame,” Nair said, welcoming the faster clearance process under the current government.

In Pedaveedu, however, the fast clearances have led to even more entrenched opposition.

“We will pour kerosene onto ourselves and die, but not let the power plant be set up,” said V. Koteshwar Rao, a resident and vice-president of the Jana Chaitanya Society, a local activist group.