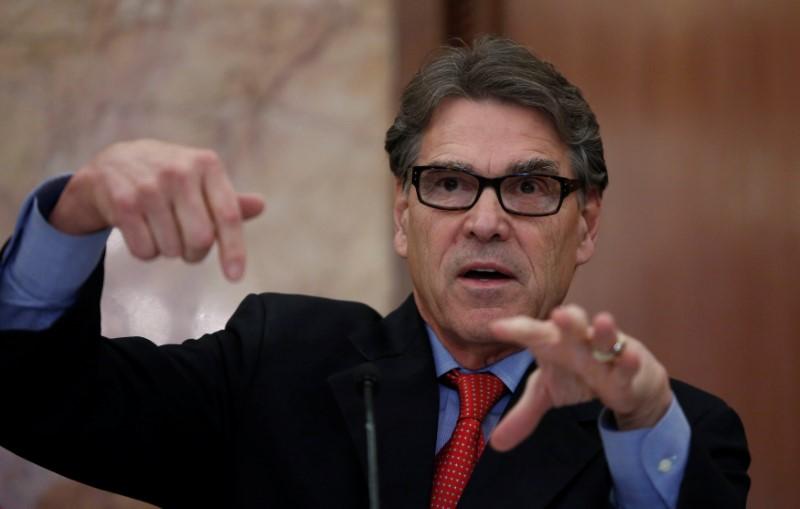 WASHINGTON (Reuters) – U.S. Energy Secretary Rick Perry will meet Russia’s energy minister next week in Washington, a person familiar with the situation said on Friday, as the two countries compete to supply global markets with natural gas and crude.

Perry will meet Russia’s Energy Minister Alexander Novak on Tuesday, in the context of the World Gas Conference that is being held in Washington, the source said.

Meetings between top energy officials from Russia and the United States, two of the world’s largest oil and gas producers, have been rare in recent years.

Relations between Moscow and Washington have cooled over Russia’s annexation of Crimea in 2014 and as the Trump administration blames the Russian government for cyber attacks that targeted the U.S. power grid over the last two years.

The United States, meanwhile, has begun some sales of liquefied natural gas, or LNG, to Poland and Lithuania, though LNG shipments can be more expensive than gas sent via pipeline. The United States says the advantage of its LNG is dependability and stable pricing.

The administration of U.S. President Donald Trump opposes the Nord Stream 2 pipeline, as did the administration of former President Barack Obama. Washington believes that the pipeline would give Russia, which has at times frozen deliveries to parts of Europe over pricing disputes, more power over the region.

The meeting comes as U.S. national security adviser John Bolton plans to visit Moscow next week to prepare for a possible meeting between Trump and Russian President Vladimir Putin.

Perry and Novak will also likely talk about oil markets. On Friday, the Organization of the Petroleum Exporting Countries agreed in Vienna to raise oil output by a modest amount after consumers had called for producers to curb rising fuel prices.

Russia, which is not an OPEC member, began cooperating last year with the group for the first time, holding back production to support global oil prices. Before the Vienna OPEC meeting, Novak said Moscow would propose a gradual increase in output from oil-producing countries, starting in July.