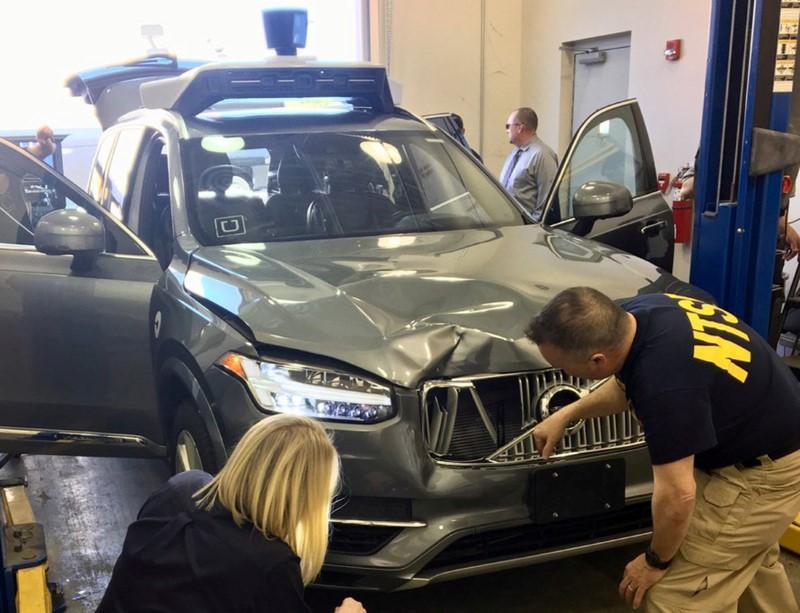 SAN FRANCISCO (Reuters) – Police in Tempe, Arizona said evidence showed the “safety” driver behind the wheel of a self-driving Uber was distracted and streaming a television show on her phone right up until about the time of a fatal accident in March, deeming the crash that rocked the nascent industry “entirely avoidable.”

A 318-page report from the Tempe Police Department, released late on Thursday in response to a public records request, said the driver, Rafaela Vasquez, repeatedly looked down and not at the road, glancing up just a half second before the car hit 49-year-old Elaine Herzberg, who was crossing the street at night.

According to the report, Vasquez could face charges of vehicle manslaughter. Police said that, based on testing, the crash was “deemed entirely avoidable” if Vasquez had been paying attention.

Police obtained records from Hulu, an online service for streaming television shows and movies, which showed Vasquez’s account was playing the television talent show “The Voice” the night of the crash for about 42 minutes, ending at 9:59 p.m., which “coincides with the approximate time of the collision,” the report says.

It is not clear if Vasquez will be charged, and police submitted their findings to county prosecutors, who will make the determination. The Maricopa County Attorney’s Office referred the case to the Yavapai County Attorney’s office because of a conflict and that office could not be reached late Thursday.

Vasquez could not immediately be reached for comment and Reuters could not locate her attorney.

The Uber car was in autonomous mode at the time of the crash, but Uber, like other self-driving car developers, requires a back-up driver in the car to intervene when the autonomous system fails or a tricky driving situation occurs.

Vasquez looked up just 0.5 seconds before the crash, after keeping her head down for 5.3 seconds, the Tempe Police report said. Uber’s self-driving Volvo SUV was traveling at just under 44 miles-per-hour.

Last month, an Uber spokeswoman said the company was undergoing a “top-to-bottom safety review,” and had brought on a former federal transportation official to help improve the company’s safety culture. The company prohibits the use of any mobile device by safety drivers while the self-driving cars are on a public road, and drivers are told they can be fired for violating this rule.

Police said a review of video from inside the car showed Vasquez was looking down during the trip, and her face “appears to react and show a smirk or laugh at various points during the times that she is looking down.” The report found that Vasquez “was distracted and looking down” for close to seven of the nearly 22 minutes prior to the collision.

Tempe Police Detective Michael McCormick asked Hulu for help in the investigation, writing in a May 10 email to the company that “this is a very serious case where the charges of vehicle manslaughter may be charged, so correctly interpreting the information provided to us is crucial.” Hulu turned over the records on May 31.

According to a report last month by the National Transportation Safety Board, which is also investigating the crash, Vasquez told federal investigators she had been monitoring the self-driving interface in the car and that neither her personal nor business phones were in use until after the crash. That report showed Uber had disabled the emergency braking system in the Volvo, and Vasquez began braking less than a second after hitting Herzberg.

Herzberg, who was homeless, was walking her bicycle across the street, outside of a crosswalk on a four-lane road, the night of March 18 when she was struck by the front right side of the Volvo.

The police report faulted Herzberg for “unlawfully crossing the road at a location other than a marked crosswalk.”

In addition to the report, police released on Thursday a slew of audio files of 911 calls made by Vasquez, who waited at the scene for police, and bystanders the night of the crash; photographs of Herzberg’s damaged bicycle and the Uber car; and videos from police officers’ body cameras that capture the minutes after the crash, including harrowing screams in the background.

The crash dealt Uber a major setback in its efforts to develop self-driving cars, and the company shuttered its autonomous car testing program in Arizona after the incident. It says it plans to begin testing elsewhere this summer, although in some cities it will have to first win over increasingly wary regulators.