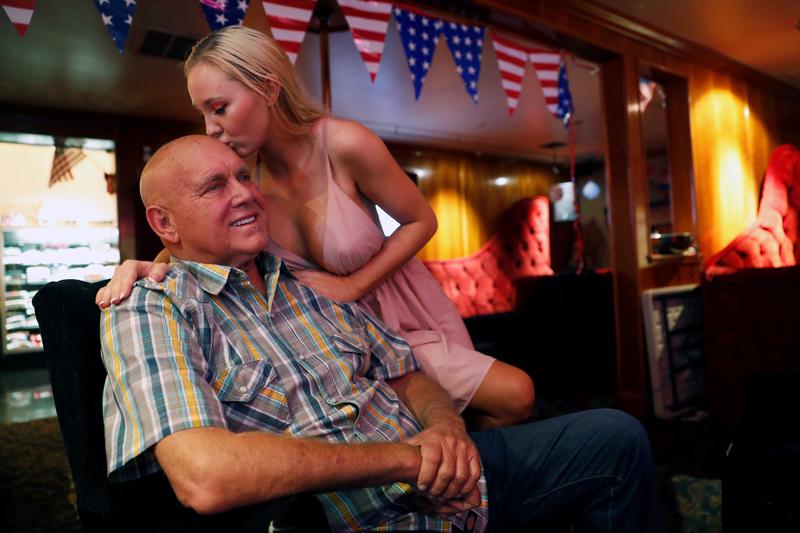 PAHRUMP, Nev. (Reuters) – He styles himself as America’s best-known pimp, a strip-club owner who runs multiple brothels and looks set to win a seat as a Republican in the Nevada legislature with the blessing of many conservative Christian voters.

Meet Dennis Hof, whose political rise reflects fundamental changes in electoral norms that have roiled the Republican Party and upended American politics during the era of President Donald Trump.

“This really is the Trump movement,” Hof, 71, told Reuters in an interview at Moonlite BunnyRanch, his brothel near Carson City in northern Nevada that was featured on the HBO reality television series “Cathouse.”

“People will set aside for a moment their moral beliefs, their religious beliefs, to get somebody that is honest in office,” he said. “Trump is the trailblazer, he is the Christopher Columbus of honest politics.”

When news broke that Hof had won the nominating contest for a state Assembly seat on June 12, evangelical pastor Victor Fuentes said he closed his eyes and prayed.

He did not ask God to deliver Nevada and the Republican Party from Hof, the thrice-divorced author of “The Art of the Pimp” who campaigned as the “Trump of Pahrump.” Although Christian groups have long rallied against the state’s legal brothel industry, Fuentes was willing to overlook Hof’s history as a champion of the flesh trade and gave thanks for his victory.

“People want to know how an evangelical can support a self-proclaimed pimp,” Fuentes said in an interview at his home in Pahrump, an unincorporated town of 36,000 people that is the largest community in the sprawling, rural district where Hof is favored to win in November’s general election.

He said the reason was simple. “We have politicians, they might speak good words, not sleep with prostitutes, be a good neighbor. But by their decisions, they have evil in their heart. Dennis Hof is not like that.”

The pastor said he felt Hof would protect religious rights, among other things.

In Hof’s Republican-leaning district, seven evangelicals said they voted for him because they believed that he, who like Trump is a wealthy businessman and political outsider, would also clean up politics and not be beholden to special-interest groups and their money.

“I’m kind of rich, I’m kind of famous, and I’m surrounded by hot chicks. I don’t give a damn what anybody says about me,” Hof said.

The source of Hof’s wealth – he owns a strip club and five legal brothels – did not deter his supporters.

Nor did the allegations by several women that Hof sexually abused them. Hof denied the accusations, including a former sex worker’s claim that he raped and choked her several years ago, and the voters interviewed by Reuters dismissed them as lies.

Hof was reluctant to discuss his own Christian faith.

“I don’t share my beliefs with the public,” he said. “I don’t feel the need to go to church on a regular basis.”

For decades, evangelical voters have been a pillar of the Republican Party in the United States, using grassroots muscle to turn out votes and engage in political battles over hot-button social issues such as abortion and same-sex marriage.

But in recent years, many conservative Christians have lost trust in establishment Republicans, whom they accuse of not fighting for values they feel are under attack in modern America.

For them, Trump symbolizes a new breed of politician who is willing to upend long-held political norms — a quality they say outweighs any real or perceived moral flaws.

Convinced Trump would go to bat for them, a majority of evangelicals looked past the Republican’s two divorces and allegations of marital infidelity to provide him key votes in the 2016 presidential election.

Hof beat a three-term incumbent legislator even as party activists pushed to get Hof’s legal brothels shut down. Voters in Lyon County, where he operates four of his brothels, will be asked in November if they want the businesses closed.

Brothels have been permitted in parts of Nevada since the 1800s and were first licensed in the 1970s. They are not permitted in highly populated areas, including the counties containing the cities of Las Vegas and Reno.

Hof has gotten a mixed reception from Republican leaders. The chairman of the state party said it welcomed “fiscal conservatives” such as Hof. But Brian Sandoval, Nevada’s Republican governor, Dean Heller, the state’s vulnerable Republican U.S. senator up for re-election this autumn, and much of the party establishment have not endorsed him.

No matter, said Hof. He credits Trump as the torchbearer for a new era of Republican, eager to embrace the support of the religious right, eschew the establishment and break the mold of a traditional candidate.

Trump has not weighed in on the race. But Hof held a rally with former Trump adviser Roger Stone and said he would not be in a position to win the district without the president’s transformation of the party.

Some conservative Christian voters, however, were quick to note that their affinity for Trump did not extend to Hof.

Paul Goulet, a pastor who leads the International Church of Las Vegas, a megachurch, said he was disappointed the brothel owner had earned a spot on the general election ballot.

“For me, it goes back to faith and values,” Goulet said in a telephone interview. “Hof has a profession making money out of young women who sell their bodies for sexual favors. It’s demeaning to women. I can’t wrap my brain around supporting someone who does that.”

Others were willing to set aside the morality test of the past to back Hof.

Robert Thomas, a retired prosecutor and evangelical who along with his wife, Debbie, voted for Hof, said Hof’s brothels “bother me a lot” but that he was willing to overlook them.

“Dennis Hof seems to me to be a man of his word and he does what he says,” Thomas said.