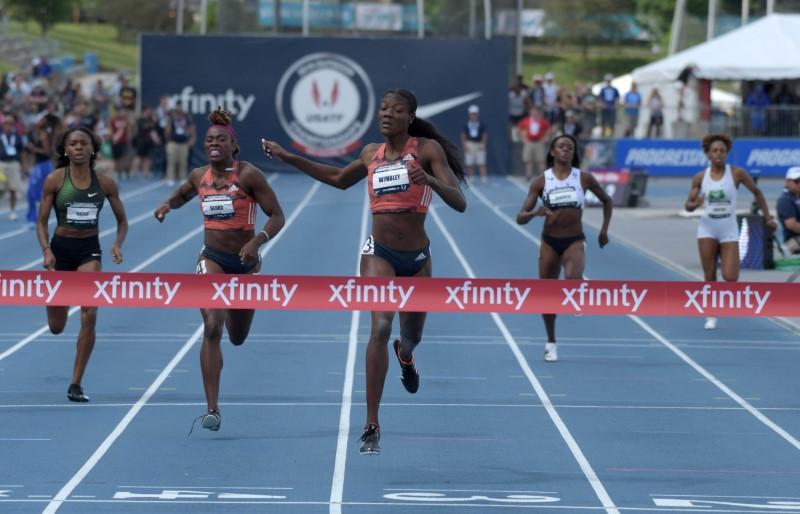 (Reuters) – The United States found a new sprint standout on Saturday when 23-year-old Shakima Wimbley equaled the year’s fastest 400 meters time with an impressive victory at the U.S. championships in Iowa.

Wimbley had never broken 50 seconds in the event until she stormed home in 49.52 seconds to tie Bahamian Olympic champion Shaunae Miller-Uibo’s best mark for 2018.

“She finally trusted in herself and executed at the right points and showed in a race what she has been doing in training,” coach Lance Brauman told Reuters in a telephone interview.

The third day of the championships also produced the best women’s hammer throw in the world this year and a sparking victory by 100m hurdles world record holder Keni Harrison.

Deanna Price regained the American record in the hammer throw with a massive toss of 78.12 meters on her fifth attempt. Previous record holder Gwen Berry was second at 72.99.

Harrison came from behind to claim the hurdles title in 12.46 seconds as she overtook Christina Manning (12.65).

Kendricks claimed his fifth consecutive pole vault title as he cleared 5.85 meters without a miss. He unsuccessfully tried three times at 5.90m.

Darrell Hill beat Crouser with a heave of 21.57m. the Rio champion only produced one clean throw, 20.99m in the second round to finish second.

The meeting ends on Sunday with the winner of field events and races through 1,500m qualifying for the July 14-15 Athletics World Cup in London.