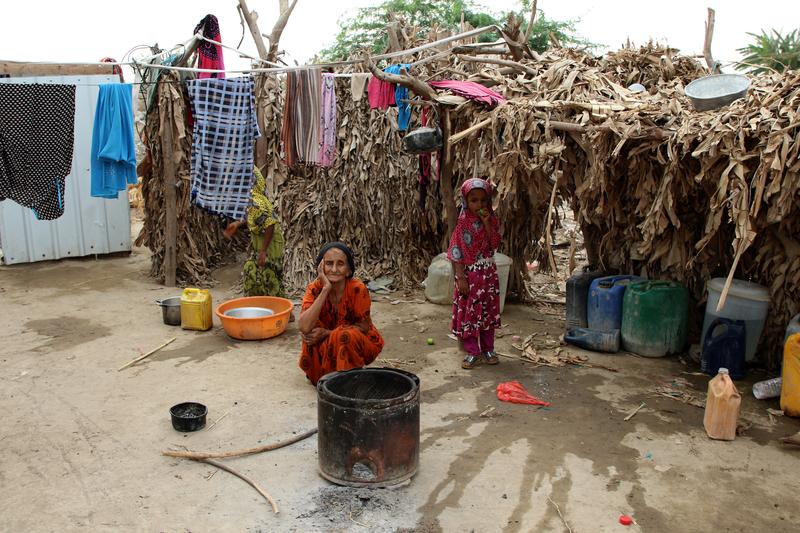 ADEN (Reuters) – Yemen’s Houthis deployed additional forces in the main port city of Hodeidah on Sunday as a Saudi-led military coalition moved closer to the city center in the largest offensive of the war, raising U.N. fears of a humanitarian catastrophe.

A woman displaced by the fighting in the Red Sea port city of Hodeidah sits near her hut at a camp for IDPs near Aden, Yemen June 23, 2018. REUTERS/Fawaz Salman

The alliance led by Saudi Arabia and the United Arab Emirates launched its assault on the heavily defended Red Sea city on June 12 to try to weaken the Iran-aligned Houthi movement by cutting off a key supply line for the group which controls the capital Sanaa and most populated areas.

“There is a heavy deployment of armed Houthis in the city and new check points have been set up in neighborhoods where there are supporters of the Tehama brigades,” said one resident, referring to a Yemeni faction from the Red Sea coastal plain that is fighting with coalition forces.

Fierce clashes broke out after midnight near Hodeidah University, around 3 km (1.9 miles) west of the city center, on the coastal road linking the airport to the port, added the resident, who requested anonymity.

Coalition forces seized the airport on Wednesday and have been consolidating their hold in the area as U.N. efforts continued to reach a political deal that would avert an assault on the port, a lifeline for millions of Yemenis.

The United Nations fears the escalation in fighting could exacerbate what is already the world’s most urgent humanitarian crisis, with 22 million Yemenis dependent on aid and an estimated 8.4 million believed to be on the verge of starvation.

The Western-backed coalition intervened in Yemen in 2015 to restore the internationally recognized government in exile, but since then neither side has made much progress in the war, widely seen as a proxy conflict between Saudi Arabia and Iran.

A boy displaced by the fighting in the Red Sea port city of Hodeidah drinks water at a school allocated for IDPs in Sanaa, Yemen June 23, 2018. REUTERS/Khaled Abdullah

The World Food Program said the fighting could result in up to 1.1 million people being either displaced or trapped within the city and in need of emergency food assistance.

U.N. envoy Martin Griffiths has visited Sanaa and Saudi Arabia to try to negotiate a solution.

The Houthis have indicated they would be willing to hand over management of the port to the United Nations, sources told Reuters. A U.S. official said Washington was urging the Saudis and Emiratis to accept the deal.

“The coalition will achieve its goal of liberating Hodeida, city & port. Yet we will support all efforts to achieve an unconditional peaceful withdrawal of Houthi gangs,” UAE Minister of State for Foreign Affairs Anwar Gargash said in a Twitter post on Saturday.

The Arab states say they must recapture Hodeidah to deprive the Houthis of their main source of income and prevent them from smuggling in Iranian-made missiles, which have been launched at Saudi cities. The group and Tehran deny the accusations.

The coalition has pledged a swift military operation to take over the airport and seaport without entering the city center, to minimize civilian casualties and maintain the flow of goods.

“The battle for Hodeida is reaching the point of no return,” the International Crisis Group said in a conflict alert.

“This is the final, fragile moment in which it may still be possible for UN-led negotiations to prevent a destructive fight that is likely to exacerbate dire humanitarian conditions and further delay broader negotiations to end the war.”