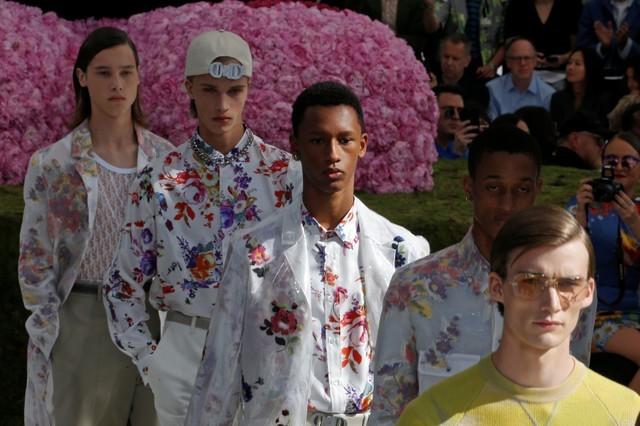 PARIS (Reuters) – A giant sculpture made of pink and black flowers set the tone at Christian Dior’s catwalk show in Paris on Saturday as new menswear designer Kim Jones stamped his style on the storied French label with a display of floral-inspired, airy looks.

To a booming techno-pop soundtrack, models clad in pastel blues and pinks, with occasional splashes of acid yellow, sauntered round the larger-than-life sculpture by New-York based artist KAWS, known for his teddy-like toys.

Singers Lenny Kravitz and Lily Allen and actors Robert Pattinson and Gwendoline Christie were among celebrities hogging the front row at the hotly-anticipated show, which comes amid a period of upheaval for menswear fashion.

British designer Jones, formerly of LVMH stablemate Louis Vuitton, took the Dior job in March, in a merry-go-round of designer changes at the French conglomerate.

Top luxury brands are looking to renew their menswear offering and tap into a growing clientele drawn in part by a shift toward street-style, sportier looks.

Jones, known for infusing this urban edge into designs during his Vuitton tenure, including through a hit collaboration with skatewear brand Supreme, took a slightly different turn with his Dior reinvention.

The collection broke with a darker, more rock-and-roll style that had endured at Dior’s menswear collections since designer Hedi Slimane was at the helm in the early 2000s and brought in sharp, slim-cut silhouettes.

Jones took his inspiration from the label’s founder Christian Dior, according to show notes, including the designer’s love of nature.

The collection also featured accessories long associated with the womenswear collections at Dior, such as a handbags shaped as saddles, which models wore attached to belts or as saddle-style pockets stitched onto backpacks.