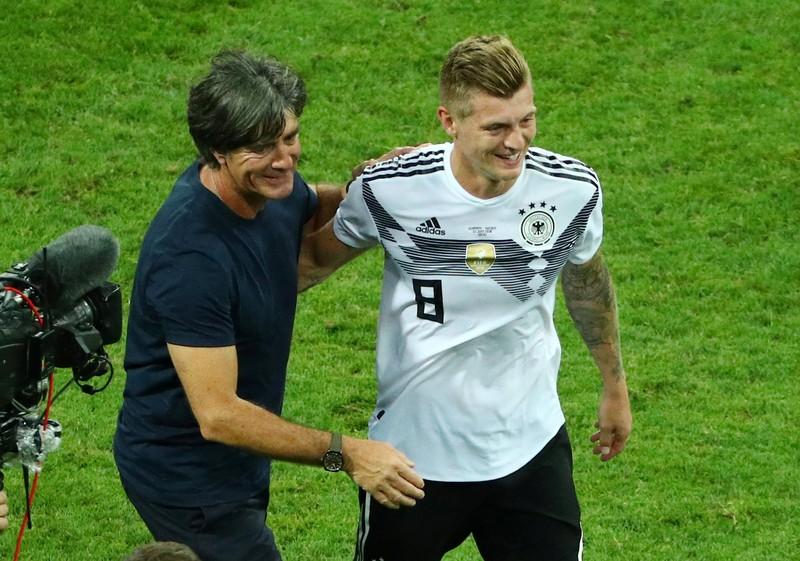 MOSCOW (Reuters) – World champions Germany’s last-gasp victory over Sweden on Saturday unleashed a wave of euphoria among players and coaching staff but head coach Joachim Loew said changes would be needed for their final Group F game against South Korea.

The Germans scored a stoppage time winner through Toni Kroos to snatch a 2-1 victory over the Swedes and hand themselves a lifeline for a spot in the knockout stage after having suffered a shock opening loss to Mexico.

The Mexicans are top of six points with Sweden and Germany on three and Korea still pointless.

The Germans must ideally now beat South Korea in their final group game to maintain their chances of advancing as one of the top two teams in the group but will need again to make changes to their lineup.

Loew made four changes for their game against Sweden, leaving out Mesut Ozil among other, but Jerome Boateng’s red card, Sebastian Rudy’s broken nose and fatigue among his player will see him field a different lineup on Wednesday.

“My players were tired at the end of the game and Marco (Reus) had cramps as early as 10 minutes before the end,” Loew told reporters.

“Jerome Boateng is suspended and Sebastian Rudy broke his nose. We will need a couple of days to recover. Rudy could potentially play on Wednesday but we will need to wait and see.”

Boateng’s absence is especially bitter for the Germans with fellow central defender Mats Hummels having missed the Sweden game with a neck injury.

Loew said he was hopeful Hummels, who has not trained in the past days, would be back in time for the game against South Korea to partner Antonio Ruediger.

“Mats is likely to play and if he does then we have another option in defense,” said the coach.

Loew’s unusual lineup on Saturday did not include playmaker Ozil, who had played 26 consecutive matches at World Cups and Euros.

His lackluster form against Mexico, however, and the furor caused ahead of the tournament by a picture he took with Turkish President Tayyip Erdogan had worked against him.

It is unlikely he will start, with Germany needing to be as agile and aggressive against the Koreans as they were against Sweden.

Apart from Reus, who should again be in the starting 11, chances for a spot are also big for Julian Brandt, the attacking midfielder who has twice come on as a substitute to give much-needed impulses. He also hit the post with a missile minutes before Kroos scored the winner on Saturday.

“The cards are being shuffled again for the last game,” said Germany team manager Oliver Bierhoff. “Our deep bench will help us in this case.”