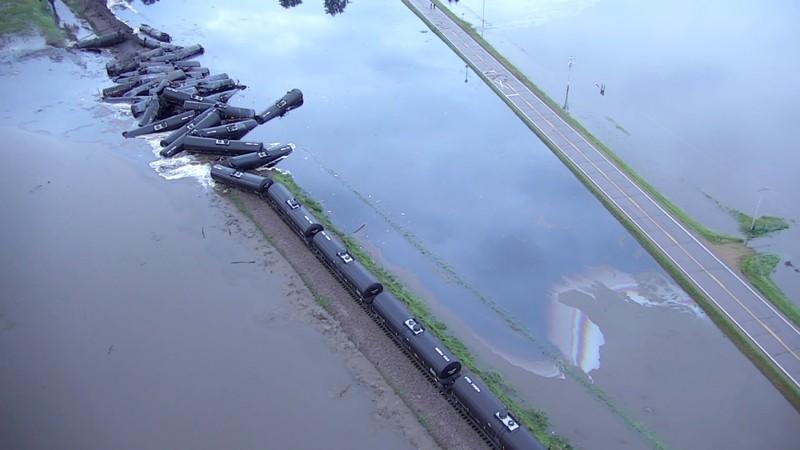 (Reuters) – BNSF Railway Co on Monday said it could resume service Tuesday on a stretch of northwestern Iowa track damaged when a train left the track and crude oil spilled from derailed cars.

The crude oil train derailed near Doon, Iowa, on Friday sending 32 rail cars off the track and spilling an estimated 230,000 gallons of oil into flood waters and toward a nearby river. Crews are nearly finished removing oil from damaged cars and repairing tracks, BNSF said in a statement.

Its crews are using booms to contain the oil and skimmers to remove it from the waters, said BNSF, a unit of Berkshire Hathaway Inc (BRKa.N).

The railroad said booms also have been placed “approximately five miles downstream to capture any oil that may have traveled with floodwaters through nearby fields.” The derailment occurred near where the tracks cross the Rock River.

The train included 98 tank cars moving in total some 58,000 barrels of crude oil from Western Canada to Stroud, Oklahoma for oil producer ConocoPhillips (COP.N), a Conoco spokesman said. The oil company said it expected minimal disruption to its shipments as a result of the accident.

“The accident is a manifestation of increased crude-by-rail from Western Canada due to pipeline constraints,” said Kevin Birn, an energy analyst at IHSMarkit in Calgary. As of March, crude by rail out of Western Canada reached 170,000 barrels per day (bpd), compared with 155,000 bpd at the same time a year ago, he said.

More Canadian oil is moving south on trains and trucks to the U.S. because of a lift in global oil prices encouraging more production and a lack of available pipeline space. Canada’s oil overall exports by rail averaged 4 million barrels a month in 2017.

BNSF has not said what caused the train to leave the tracks, but the area has suffered flooding in recent days. There were no injuries and no fire resulting from the accident.