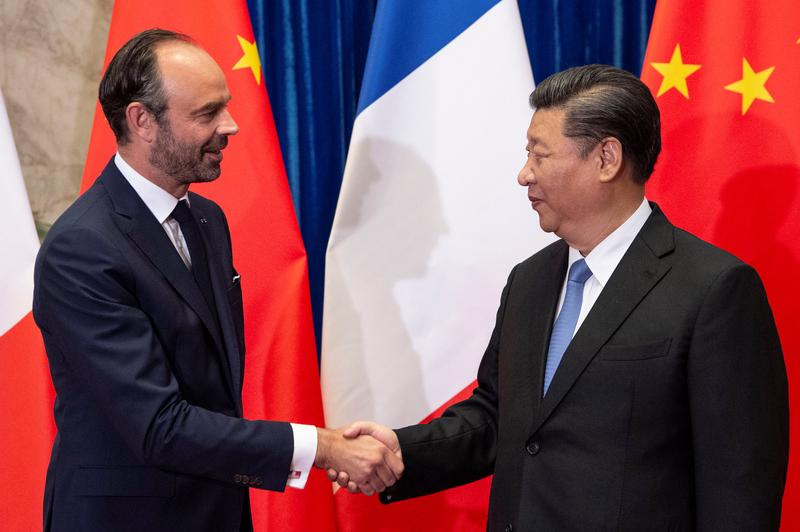 BEIJING (Reuters) – China told France on Monday it would buy more of its farm produce, hinted at future Airbus purchases and pledged to work on market access, shoring up its trade ties with Europe amid the increasing danger of a tariff war with the United States.

Paris and the European planemaker have been working to salvage a deal since President Emmanuel Macron returned from Beijing empty-handed in January.

Industry sources say a blunder by diplomats and some of Macron’s own comments, revealing details of airplane negotiations with top officials, upset the Chinese.

“I explained to Mr Prime Minister that in recent years we have bought quite a lot of passenger aircraft, and there needs to be a period to digest this,” Li told a joint news conference. “In spite of this, we are still willing to strengthen cooperation with France’s Airbus.”

China has struck a very different tone with the United States, having warned that Boeing could become a casualty if the world’s two largest economies fail to halt their slide toward a trade war.

Both China and the European Union are locked in their own trade disputes with the United States, and China has been seeking common ground with the EU in opposing what Beijing sees as U.S. protectionism.

“We believe that relevant frictions and disputes can be resolved via talks. There are no winners from fighting a trade war,” Li said. “All sides should join together to expand growth and not engage in putting up trade barriers or protectionism. This is good for nobody.”

Later this week, the Trump administration is expected to unveil new measures to curb Chinese companies buying stakes in U.S. firms in another twist to the spiraling trade conflict.

The U.S. Treasury Department is drafting restrictions that would block firms with at least 25 percent Chinese ownership from buying U.S. companies with “industrially significant technology,” a government official briefed on the matter said on Sunday.

Washington has complained that China is misappropriating U.S. technology through joint venture rules and other policies, and it has already announced tariffs on $34 billion worth of Chinese goods, the first of a potential total of $450 billion, as a result. The new tariffs are due to take effect on July 6.

During his visit to China in January, Macron said a contract with Beijing for 184 Airbus A320 narrow-body jets would be finalised soon.

Li’s remarks appeared to strengthen the chance of more business for Airbus, although no deal was signed on Monday, as China usually reserves awarding such big prizes to visits by top foreign leaders.

China on Monday also signed an agreement to import beef from France, just as U.S. beef shipments are threatened with tariffs. Last year, China signaled the end of an embargo on French beef that was first imposed after the mad cow disease crisis in Europe more than two decades ago.

Hosting talks on a bilateral investment agreement with the European Union on Monday, Vice President Liu He said China and the EU had a common interest in defending the global multilateral trading system.

“Both sides believe that we must resolutely oppose unilateralism and trade protectionism and prevent such behavior from causing volatility and recession in the global economy,” Liu told a media briefing after the talks.

Both China and the EU have already announced retaliatory measures against punitive U.S. tariffs.

China will impose additional 25 percent tariffs on 659 U.S. goods worth $50 billion in response to the U.S. announcement that it will levy tariffs on Chinese imports.

Tariffs on $34 billion of U.S. goods including agricultural products such as soybeans will take effect from July 6, the Chinese commerce ministry said. Soybeans are China’s biggest import from the United States by value.

The European Union last week imposed tariffs on a range of U.S. goods in response to import duties on EU steel and aluminum by the U.S. administration.

A top EU official, however, made it clear that Europe is not fully on the same page as China.

Katainen said China and the EU needed to tackle overcapacity in sectors such as steel and aluminum, specifically identifying industries Trump first targeted when he launched a tariff war.