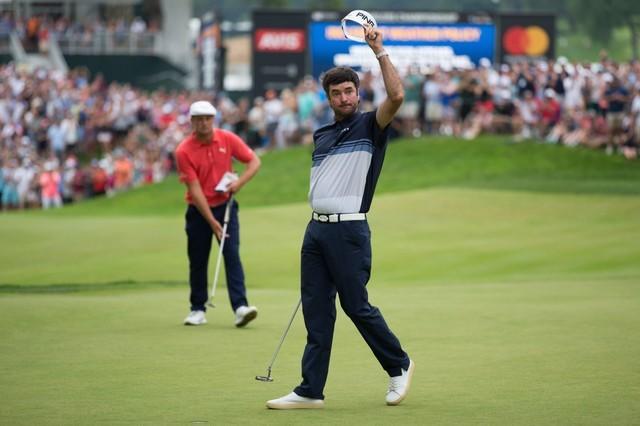 (Reuters) – Bubba Watson stormed back from six strokes behind in the final round to overhaul Englishman Paul Casey and win the Travelers Championship by three strokes in Cromwell, Connecticut on Sunday.

Jun 24, 2018; Cromwell, CT, USA; Bubba Watson reacts after his birdie putt on the 18th hole during the final round of the Travelers Championship at TPC River Highlands. Mandatory Credit: Bill Streicher-USA TODAY Sports

Watson carded a seven-under-par 63, highlighting his performance with a three-foot birdie at the final hole at TPC River Highlands after almost sinking his approach.

The American finished at 17-under 263 for his third victory in the event, and also became the first three-times winner on the PGA Tour this year.

He previously won at Riviera in Los Angeles, also for the third time, and at the World Golf Championships-Match Play in Austin, Texas.

Casey started the day with a four-shot cushion over his closest rival American Russell Henley, but a birdie at the first hole was his only one the entire day as his swing deserted him.

Casey was also edged out by Watson in a playoff in the same tournament in 2015.

He described the day as “terribly frustrating” after posting his eighth career runner-up finish on the PGA Tour, to go with two victories.

“There was a lot of fight in there but I fought my golf swing all day, as you could see coming down the last couple of holes,” he told CBS television, citing poor iron shots down the stretch.

“You’ve got to give credit to Bubba but I’ll go away and analyze this and see what we can do better in future.”

Reporting by Andrew Both in Cary, North Carolina; editing by Ken Ferris