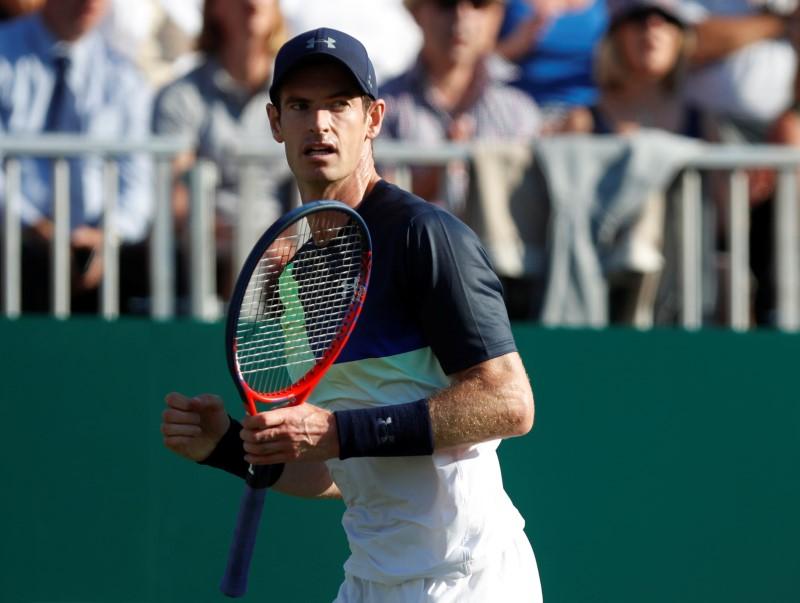 EASTBOURNE, Engkand (Reuters) – Andy Murray claimed his first win since returning from a hip injury as he trounced fellow three-time Grand Slam champion Stan Wawrinka 6-1 6-3 in the first round of the Eastbourne championships on Monday.

An unlikely clash on the sun-baked south coast between two wild cards ranked 156th and 225th respectively was not much of a contest but was hugely significant for Murray as he tested his fitness for next week’s Wimbledon.

Having lost to Australian Nick Kyrgios in the first round of last week’s Queen’s Club tournament — his first match for almost a year — Murray took a late entry into Eastbourne to put his hip through another examination.

The Scot looked hugely relieved when Wawrinka, himself trying to get back up to speed after knee surgery, double-faulted to end the one hour 17 minute contest in front of a sell-out crowd on center court.

It was his first match win since he beat Benoit Paire in the last 16 of Wimbledon 350 days ago before he hobbled out against American Sam Querrey to end his Wimbledon title defense.

He had hip surgery in January and has been in a race against time to be fit for Wimbledon.

Murray appeared to be moving well, better than against Kyrgios when he appeared to be limping near the end, and his trademark scrambling skills were also in evidence.

Murray sounded a note of caution afterwards, however, saying the real proof of his fitness would be how his body responds to face new British number one and Eastbourne second seed Kyle Edmund in an intriguing clash on Wednesday.

“I am going to decide nearer the time (about Wimbledon). I need to see how my body pulls up. I’ll see how I am tomorrow and take it from there,” Murray said before heading to the ice bath.

Murray’s last match at Eastbourne’s quaint Devonshire Park was in a Davis Cup tie in 2006 and the appearance of Britain’s most celebrated player generated a buzz around the grounds.

Wawrinka presented a formidable first-round barrier but Murray quickly established control after breaking for a 3-1 lead — Wawrinka losing patience as Murray launched himself around the baseline returning everything the Swiss threw his way.

Murray won five games in a row in the opening set and while Wawrinka improved in the second Murray’s clever changes of pace forced more errors and he broke for a 3-2 lead.

After Wawrinka failed to capitalize on three break points with Murray serving at 4-3, the Swiss capitulated in the next game.

In the women’s tournament, there was a scare for Czech defending champion and second seed Karolina Pliskova but she survived to beat Russian Anastasia Pavlyuchenkova 6-4 2-6 6-3.