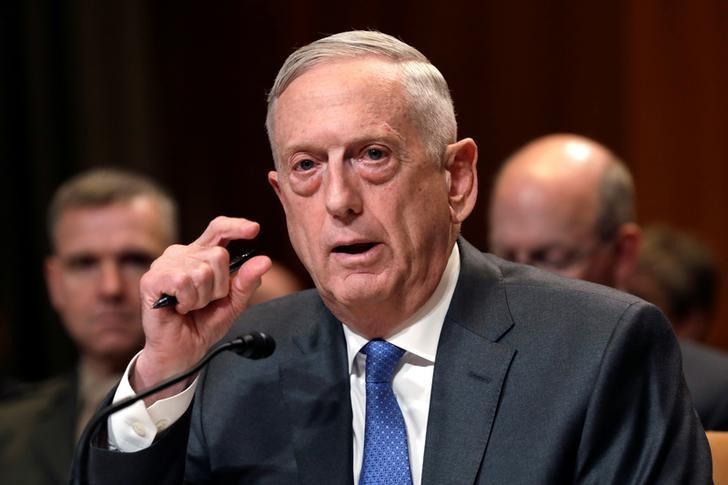 Mattis, speaking to reporters during a flight to Alaska, did not specify the names of the bases or say whether they would house immigrant children or their parents, or both.

“The details are being worked out … about exactly how much capacity they need at the two bases, what other kinds of facilities they need built,” Mattis said, as he disclosed the request for the facilities from the government’s Department of Homeland Security.

In the face of outrage at home and overseas over his crackdown on illegal immigration, Trump was forced last week to abandon his policy of separating children from parents who are apprehended for illegally crossing the U.S.-Mexico border.

Even though the president has now ordered that families be kept together in detention during immigration proceedings, it remained unclear where families would be held while the parents face criminal charges.

The U.S. military, and Mattis in particular, have stressed that it is simply providing logistical support to the Department of Homeland Security, which deals with immigration issues.

Mattis said the U.S. military had for decades provided shelter to immigrants, including for Vietnamese refugees in the aftermath of the Vietnam War.

“Providing shelter for people without shelter, we consider that to be a logistics function that is quite appropriate,” he said, when asked whether he had any concerns about a U.S. military role in immigration policies.

Although Mattis did not cite how many people could be housed at the bases, the U.S. military said on Thursday it had been asked by the government to get ready to house up to 20,000 immigrant children.

It said the government had already assessed three military bases in Texas and would review another in Arkansas.

Trump has previously turned to the military to help with his border crackdown. Earlier this year, U.S. National Guard forces were dispatched to border states to help tighten security.