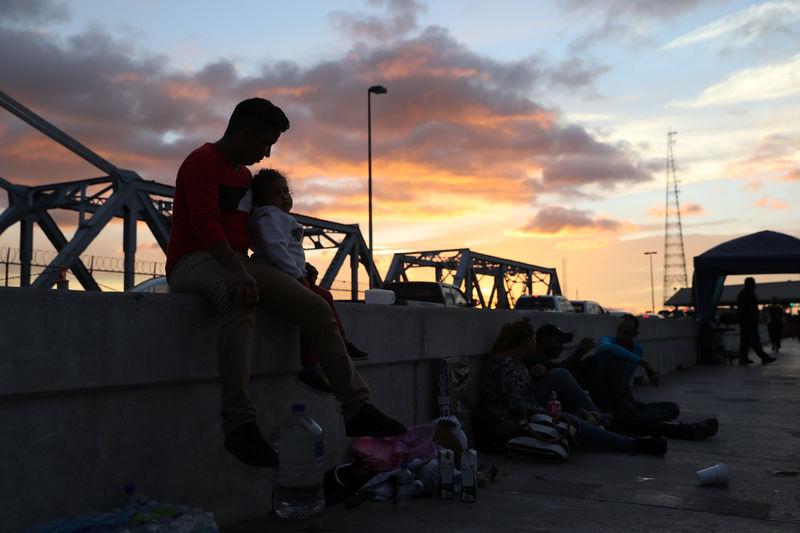 WASHINGTON (Reuters) – President Donald Trump reiterated frustration at laws granting due process to illegal immigrants on Monday and said people should be turned away at the border, as expectations faded for a speedy fix in the U.S. Congress to the border crisis.

Honduran asylum seeker Elder Diaz and his 3-year-old daughter Gisela Diaz wait on the Mexican side of the Brownsville & Matamoros International Bridge after being denied entry by U.S. Customs and Border Protection officers near Brownsville. REUTERS/Loren Elliott

Heavily criticized for a policy that led to more than 2,000 children being separated from their parents at the U.S.-Mexico border, Trump defended his “zero tolerance” immigration policy, as government agencies struggle to address its ramifications.

“Hiring many thousands of judges, and going through a long and complicated legal process, is not the way to go – will always be disfunctional (sic),” Trump said in a tweet.

“People must simply be stopped at the Border and told they cannot come into the U.S. illegally. Children brought back to their country.”

Trump expressed a similar view on Sunday, saying in a tweet that “We cannot allow all of these people to invade our Country” and they should be sent home with no judges or court cases.

Democrats have accused Trump of wanting to circumvent the U.S. Constitution’s guarantee of due process for those accused of crimes.

A Honduran family seeking asylum waits on the Mexican side of the Brownsville & Matamoros International Bridge after being denied entry by U.S. Customs and Border Protection officers near Brownsville, Texas, June 24, 2018. REUTERS/Loren Elliott

Trump faced a global outcry, including criticism from some in his own Republican Party, this month over migrant children who were separated from their parents because of the administration’s two-month old policy of seeking to detain and prosecute everyone caught entering the country illegally.

The president caved on Wednesday, issuing an executive order that ended the separations. But the zero tolerance policy remains in place, raising questions about where to house families detained at the border and how to process them speedily. Despite his order, the government has yet to reunite more than 2,000 children with their parents.

Rather than hire more judges to adjudicate the cases of illegal immigrants and clear a backlog, Trump wants fewer border-crossers to ease the burden on the court system.

Guatemalan children, some as young as five, are being held in a dozen shelters in the northeastern United States while their parents have already been deported, Guatemalan consulate official Pedro Tzunun in New York told Reuters.

“If you’re sending a parent home, why are you keeping the children?” said Jazmin Carrillo, spokeswoman for the consulate. “We don’t understand how this can be possible.”

The border crisis has intensified Democrats’ anger with Trump and deepened a partisan divide on Capitol Hill. Republicans control Congress but are not united around a single immigration measure and a divide between moderates and conservatives has dampened prospects for a compromise.Republican Representative Mark Meadows, a leader of a conservative faction among House of Representatives Republicans, said he expected that an immigration bill to be offered for a potential vote in the House on Tuesday, the second attempt in two weeks, would fail.

On Thursday the House rejected a measure favored by conservatives that would have halted the practice of splitting up families and addressed a range of other immigration issues.

Speaking to Fox News, Meadows said that even if the measure failed, he expected follow-up legislation aimed primarily at preventing children from being separated from their parents at the border.

Tensions over the policy have boiled over. The owner of the Red Hen restaurant in Lexington, Virginia, told White House press secretary Sarah Sanders on Friday night to leave the establishment due to Trump’s policies.

Trump blasted the restaurant in a tweet on Monday.

“The Red Hen Restaurant should focus more on cleaning its filthy canopies, doors and windows (badly needs a paint job) rather than refusing to serve a fine person like Sarah Huckabee Sanders,” he said. “I always had a rule, if a restaurant is dirty on the outside, it is dirty on the inside!”