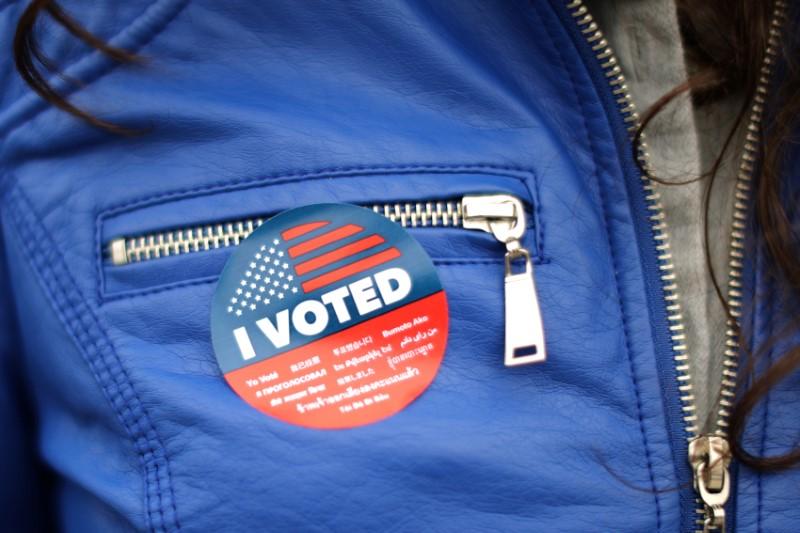 NEW YORK (Reuters) – A bitterly personal matchup in New York between a convicted felon seeking to reclaim his congressional seat from a former prosecutor is among dozens of key races in seven U.S. states on Tuesday, as voters pick candidates for November elections that will determine control of Congress.

FILE PHOTO: A woman wears a sticker in multiple languages after voting in the primary election at a polling station in Venice, Los Angeles, California, U.S. June 5, 2018. REUTERS/Lucy Nicholson/File Photo

Democrats need to flip 23 of 435 seats to gain control of the House of Representatives, which would stymie much of Trump’s agenda while opening up new avenues of investigation into his administration. They would have to net two seats to take the Senate, but face longer odds there, according to analysts.

Residents of New York City’s Staten Island borough will decide whether to give Republican Michael Grimm, fresh off a prison term for tax fraud, a chance to return to his old seat in Congress, three years after he resigned following his guilty plea.

The race has seen the candidates trade personal insults and accusations of lying, with Trump’s presence looming above it all.

Grimm, a bombastic former FBI agent known for once threatening to toss a television reporter off a balcony, has attacked incumbent Republican Representative Dan Donovan, the borough’s former district attorney, for not sufficiently supporting Trump.

Donovan, who earned Trump’s endorsement in May, has responded by calling attention to Grimm’s criminal conviction.

“They should have a reality show: ‘The Real Candidates of Staten Island,’” said Douglas Muzzio, a political science professor at Baruch College. “It’s nasty, it’s personal – and it’s enjoyable to watch.”

Voters in upstate New York will pick among seven Democrats in one of this year’s most expensive House campaigns. Republican first-term incumbent John Faso is considered vulnerable in November, and his potential challengers have collectively raised more than $7 million.

In Colorado, an establishment-backed Democrat and a liberal insurgent are vying to take on incumbent Republican Representative Mike Coffman, whose district favored Democrat Hillary Clinton over Trump in 2016.

Jason Crow, an Iraq war veteran backed by the national party, is facing Levi Tillemann, who was endorsed by Our Revolution, a group born out of Bernie Sanders’ 2016 presidential bid. Tillemann earned attention this month with an anti-gun violence video in which he blasted himself in the face with pepper spray.

South Carolina’s Republican contest for governor is the latest test of Trump’s sway among party voters. The president campaigned on Monday alongside Governor Henry McMaster, who is in a tight nominating battle with businessman John Warren. The winner is likely to prevail in November.

Voters will also pick Senate candidates in states including Utah and Maryland. Analysts say Democrats face a steep climb trying to take that chamber, as they are defending seats in states like Indiana, Montana and North Dakota that supported Trump two years ago.