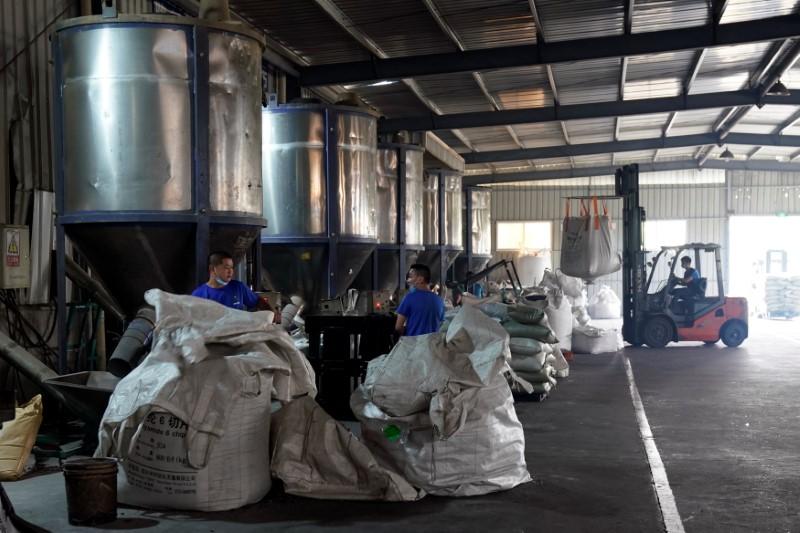 TAICANG, China (Reuters) – In a smoke-filled plant about 50 miles northwest of Shanghai, masked workers feed sacks of plastic scrap into shuddering old machines that transform them into pellets used to make a range of manufactured goods.

But while the factory, operated by Taicang Jinhui Recycling Co, remains a hive of activity, the company has been moving much of its capacity to Malaysia following Chinese restrictions on recycled plastic imports that came into effect this year.

The curbs on imported trash have deprived recyclers of about half of what they need to produce the plastic pellets they sell to manufacturers of products ranging from office furniture to sheathes for fiber-optic cables. And with domestic supply hard to come by, many have had little choice but to move abroad to stay alive.

“Here in our industrial park we are the only company still producing – another 22 enterprises have stopped operations and just do warehousing or whatever, and all their staff have disappeared,” said Jinhui’s chairman, Thomas He.

Jinhui has laid off 250 workers from its workforce of around 400 people since the restrictions came into force, though it has hired another 600 in Malaysia. The Malaysia plant was set up almost entirely with Chinese equipment and technology.

The company is one of more than 1,000 recycling enterprises – a third of China’s total – to relocate its expertise, equipment and waste supply chains to Southeast Asia, according to the China Scrap Plastic Association (CSPA), with total investment so far estimated at around 10 billion yuan ($1.54 billion). The association did not provide a breakdown.

China’s decision last July to stop importing 24 kinds of foreign waste, including plastic, was part of an effort to upgrade its economy and tackle the growing volumes of domestic trash clogging its rivers or sitting untreated in sprawling landfills that encircle major cities.

Now, countries in Southeast Asia, already struggling with their own domestic waste problems, will have to grapple with the same issues as trash imports increase.

The Chinese ban disrupted a global supply chain that saw more than 7 million tonnes of scrap plastic, mainly from Europe and the United States, delivered into Chinese ports every year.

As that supply dries up for Chinese recyclers, they have created 4 million tonnes of new capacity outside China in operations that can receive imports from countries like the United States and the United Kingdom, said Wang Wang, CSPA’s chairman. But it is not yet enough to offset a supply shortfall of about 6-8 million tonnes of recycled plastic.

“As far as our companies are concerned, they just don’t have enough raw materials,” Wang said.

Efforts to have recyclers take on more domestic waste have been progressing slowly; only 5 percent of domestic recycling firms have so far been able to switch to local sources of scrap, according to CSPA figures.

“Handling imports and handling domestic material are two very different channels and it will take time to switch,” said Jinhui’s He.

Recyclers said the government’s abrupt ban gave the sector no time to adjust, and crucially, China has not devised policies required to scale up and standardize treatment of domestic waste, which is usually handled by small backstreet operators.

With foreign material still the best option, companies hoped moving to countries like Malaysia and Thailand would enable them to deliver processed foreign scrap to China in a higher-grade form, but their shipments have faced delays.

Customs are under pressure to ensure not only that imported pellets meet exacting standards, but also that containers are not being used to smuggle illegal low-grade waste, and cargoes are under far greater scrutiny, He said.

The shift to Southeast Asia has alleviated some of the disruptions caused by the ban for companies in Europe.

“We are continuing to export significant volumes, but to different destinations,” said Roger Baynham, head of the recycling division of the British Plastics Federation.

But as foreign trash piles up in countries like Thailand and Vietnam, China’s recyclers face more risks.

“No one wants this trash and the industry is worried these other countries will impose their own restrictions,” said a China-based executive with an overseas recycling firm who did not want to give his name.

Jinhui’s He said he was worried that importing rules were likely to get tougher across the region amid environmental concerns.

“There’s no way China will import this sort of stuff again,” he said. And Southeast Asia “will become more standardized and regulate more stringently”.

Ultimately, bans in China and restrictions elsewhere could force the countries of origin to step up their own recycling efforts, said the British Plastics Federation’s Baynham.

“The irony here is that the impetus for this has come from China, as opposed to economies such as the United Kingdom, which has been happy to accept a get-out-of-jail card in terms of its recycling strategy,” he said.

“Now is the time for the developed world, and the United Kingdom in particular, to step up.”