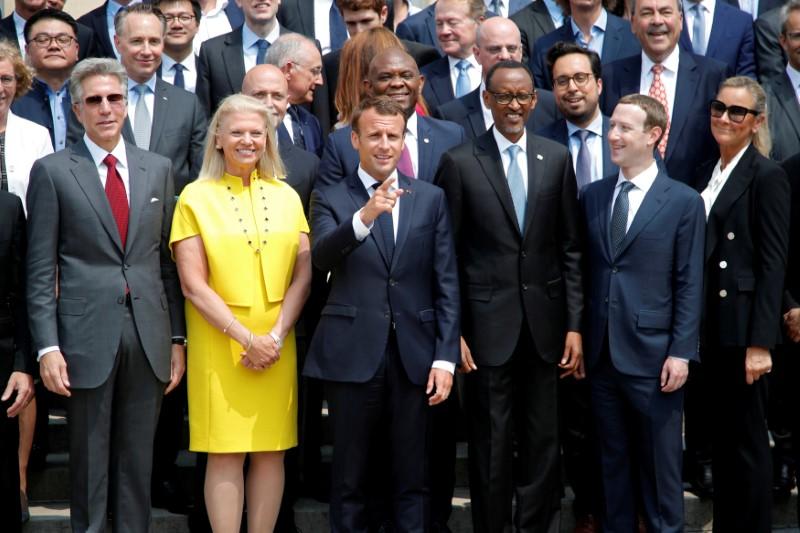 PARIS (Reuters) – When the founder of France’s Qwant search engine went to his local tax office to catch up on business, an agent there had to look up the firm using U.S. rival Google.

When she did, Qwant’s home page was blocked – by the government tax office’s firewall.

To Eric Leandri, the founder of Qwant, the episode illustrated a French paradox: startups are benefiting from President Emmanuel Macron’s support, but so are global tech giants, and competing with them is proving a problem.

“Can you imagine?” he told Reuters. “It just gives you an idea of how these people can’t see what’s in front of them.”

Over the past few years, ‘French Tech’ has been catching up with regional leader Britain.

Macron, a 40-year-old former investment banker who styles himself as a champion of the tech-savvy youth, pledges to turn France into a “startup nation”.

He has sought to redirect investment flows to improve funding for startups, made taxes more attractive and extended a tech visa program to draw foreign expertise. He also plans to simplify red tape to make setting up companies easier.

A generation of young entrepreneurs is less interested in careers in public service or at blue chip companies, and wants to innovate.

And aggressive funding by France’s state investment bank is trying to push France’s traditional strengths in mathematics and engineering to nurture the sector.

At the same time, Macron wants to attract investment from tech leaders like Google, Apple, Facebook and Amazon — disparagingly referred to as “GAFAs” in French — and that is frustrating some French firms struggling to make a mark in the early days of Macron’s rule.

For the founder of Snips, a Paris-based artificial intelligence startup developing an “Alexa killer” to take on Amazon’s voice assistant, big announcements made by U.S. tech giants and hailed by Macron to open AI hubs in France left a bitter taste.

“The biggest companies that were showcased were Samsung, Facebook, Microsoft … there wasn’t a single French company. They want big names,” said Rand Hindi, a computer whiz who coded at the age of 10 and founded his first startup at 14.

“It’s PR for the outside world, showing France can attract the best. I would have done the same if I were him. That’s the only way for American and English newspapers to talk about us. But it did sound a bit off domestically,” he added.

Clad in a long black cape, sporting a hat and a shiny pendant around his neck, the would-be tech guru looks the part.

But the 33-year-old says his 70-strong company struggles to get work from big French groups, who often prefer to opt for well-established rivals.

A recent, potentially transformational deal with a large French company Hindi did not name, but which is listed on the CAC-40 index, fell through after months of work despite the client telling Snips they performed better in technical tests.

The client went instead for a big U.S. group with extensive ‘support’.

Hindi’s problem gets to the heart of Macron’s challenge, as the president seeks to make France a world leader in AI.

French tech firms welcome Macron’s support and accept that he wants a break from the ‘dirigiste’ French tradition of the past, when the government would pick national winners and throw subsidies at them to keep them afloat.

Yet without it they wonder how they will grow and become players on the national stage and beyond.

“I’m not saying we should be protectionists. But each time I see a French company buy U.S. technology when a European alternative exists, I take it as a betrayal of the ecosystem.”

A French presidential adviser said that the government wanted to attract investment from major global tech players to help create an environment in which local firms would thrive.

At the “Tech for Good” summit held by Macron at the Elysee last month, most of the 61 guests invited were foreign chief executives including Facebook’s Mark Zuckerberg and Microsoft’s Satya Nadella.

Particularly disheartening to the local tech sector was the recent decision by French IT services giant Atos to partner with Google in the field of artificial intelligence.

The company is headed by a former French finance minister who has preached the need to ‘buy French’.

France’s legal framework, despite several attempts in recent years to modernize it, sometimes work against startups.

Three annual accounts are often compulsory before a company is allowed to bid for public tenders. In the U.S. or Britain, new firms can immediately pitch for work without such obstacles.

European digital and financial markets are fragmented along national lines, and the absence of a “European Nasdaq” to give local firms access to serious funding through direct sales or IPOs is a further barrier to expansion.

Despite the hurdles, there is plenty of optimism surrounding “La French Tech”.

Macron’s team is confident the “Macron effect”, combined with the impact of Brexit on London’s appeal and Donald Trump’s protectionism, will make France an increasingly attractive draw.

“This is no Minitel,” said an adviser, when presenting Macron’s plan to win the “arms race” in artificial intelligence, referring to the state-funded 1980s Internet precursor that failed to spread beyond France’s borders.

“In a way, we’re less interventionist in how French national champions are built. However, we want to create the right framework to let these champions emerge naturally by the quality of their products, their management team,” another adviser said.

The increased inflow of foreign investment has helped reverse a brain drain that included the departure of Yann LeCun, a leading French tech light, to New York to set up Facebook’s AI research hub.

“There’s a snowball effect, Macron did manage that. Many companies are settling in, brains are coming back from abroad,” Antoine Bordes, who heads Facebook’s Paris AI hub, Europe’s biggest, told Reuters at the group’s new offices in the heart of the French capital.

But some in the Macron orbit see risks.

Cedric Villani, a member of parliament in Macron’s party and the president’s appointed AI specialist, had a stark warning:

“They invest here so they are allies,” he told Reuters in the gardens of French parliament. “But they capture local resources so they are also competitors.”

For the lawmaker, the risk for France is about losing independence: “That’s cybercolonisation.”