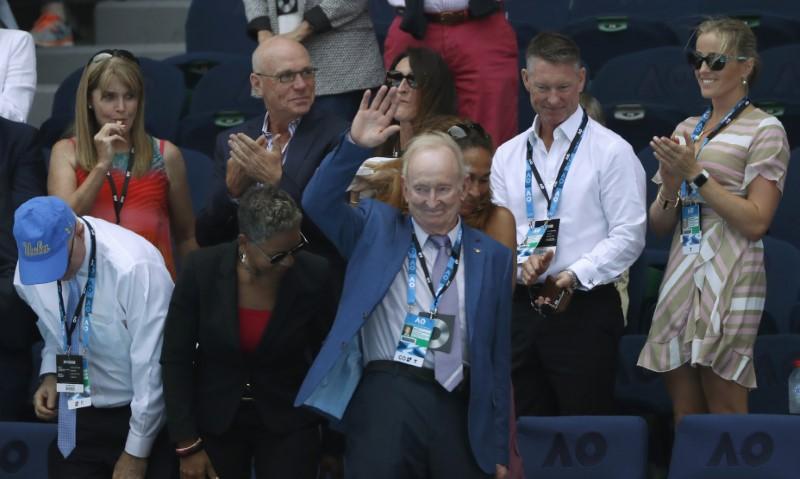 LONDON (Reuters) – In the debate about the greatest players of all time, the names of Rod Laver and Billie Jean King crop up again and again.

With 59 Grand Slam titles between them, King pipping Laver with 12 to 11 in singles titles alone, the pair left an indelible imprint on the sport in the 1960s and 1970s.

This year is the 50th anniversary of the first Wimbledon of the professional era and fittingly the pair, who each won the singles title in 1968, will be back at the All England Club as the “Chairman’s Guests”.

For Laver, his victory in 1968 was a sweet one, the Australian having been banned for the previous five years because he had turned professional in 1962.

It was only when Wimbledon led the way in making the sport’s governing bodies allow the professionals to join the amateurs, who were being paid under the table, that the likes of Laver were allowed back in.

In 1962 Laver completed the calendar-year Grand Slam – winning Wimbledon, U.S. Open, French Open and Australian Open – and after he was welcomed back in 1968, he promptly won the Wimbledon title again, beating fellow Australian Tony Roche in the final.

Seven years after his first Wimbledon win, Laver said turning professional, when he repeatedly played against the likes of Ken Rosewall, Pancho Gonzales and Lew Hoad, had hardened him up.

“I was pretty fortunate this happened for the five years, then when Open tennis came along, and I got a chance to play in the Open ranks, I was a different player,” Laver told Reuters earlier this year.

“All the amateur guys said: ‘Who is this guy now? He doesn’t miss too many, he doesn’t make mistakes, his second service is as good as his first.’

“That was the nice thing that happened to me. It (the Open era) was great for tennis.”

King’s 1968 victory was her third straight Wimbledon win and she went on to add three more singles titles at SW19 in the early 1970s.

By the time she was done, she had won 39 Grand Slam titles in all, including doubles and mixed doubles.

King said she feels Laver would have won many more Grand Slam crowns had he not been banned alongside the other professionals.

“Here’s a guy who missed out on 20 opportunities to win another major, so when somebody looks at his total majors at 11, it’s a joke,” King told Reuters.

“So when I see Federer win 20, in the back of my mind I wonder how many Rocket (Laver) could have won. There should be a caveat if we’re going to do our history right. People sacrificed to try to make the game better.”

AT THE FOREFRONT OF CHANGE

King was at the forefront of the change and was delighted to play at Wimbledon in 1968, having been unable to compete in the first tournament of the Open era in Bournemouth, in April of that year, because she had just signed up with a professional group.

“I was absolutely thrilled – and because we missed Bournemouth, too, I thought, finally, we get to play as professionals,” said King, who beat Australian Judy Tegart in the final.

King believes tennis historians should stop thinking about tennis as if it had begun in 1968.

“I think we should get rid of the Open era, either you won or you didn’t win,” she said.

“Margaret Court and I are in the middle, I call us the transition generation from amateur to professional. Sometimes (people) will say ‘Billie was a three-time U.S. Open champion’ – no I am not, I’m four-time, one of them was nationals but that was still the U.S. Open.

“It’s not our fault it wasn’t pro, why do you keep penalizing us, we’re the ones who really helped it become pro.”

Wimbledon will celebrate their achievements and their role in bringing in the professional era with a series of events and features around the grounds.

For the record, Laver received 2,000 pounds for his victory in 1968 while King was given a cheque for 750 pounds. She would become a key campaigner for equal prize money in the years which followed. In 2007, Wimbledon became the last of the four Grand Slams to award equal pay to the winner.