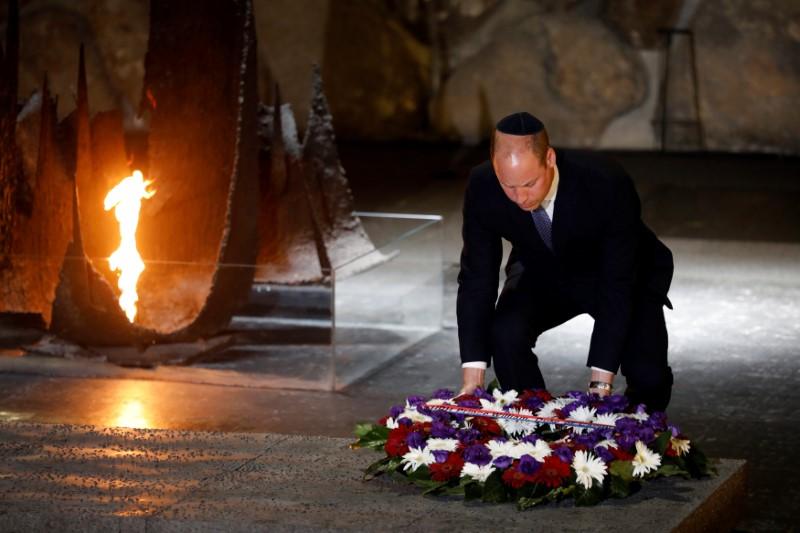 JERUSALEM (Reuters) – Britain’s Prince William voiced his horror over the Nazi Holocaust in a solemn start on Tuesday to the first official visit by a British royal to Israel and the Palestinian territories.

Britain’s Prince William lays a wreath during a ceremony commemorating the six million Jews killed by the Nazis in the Holocaust, in the Hall of Remembrance at Yad Vashem World Holocaust Remembrance Center in Jerusalem, June 26, 2018. REUTERS/Amir Cohen

Wearing a black Jewish skullcap, William, second in line to the throne, laid a wreath in the Hall of Remembrance at the Yad Vashem memorial, where an eternal flame flickers and the names of extermination and concentration camps are engraved in the floor.

“Terrifying,” William said, viewing a display at the memorial’s museum of shoes taken by the Nazis from Jews at a death camp. “(I’m) trying to comprehend the scale.”

Henry Foner, 86, and Paul Alexander, 80, were among thousands of Jewish children taken in by Britain as part of the 1930s “Kindertransport” from a continental Europe that was falling to German conquest.

Speaking before William’s visit, Alexander, freshly back from a bicycle ride that retraced his life-saving voyage as a toddler, said he was chosen to meet the prince as the youngest member of the Kindertransport.

“When I put my foot on English soil for the first time, it was like I had been reborn, because I left Nazi Germany and was received by the British people and I have an enormous debt of the thanks to the British people,” Alexander told Reuters.

Originally from Leipzig, Alexander was reunited with his mother, who reached Britain the day before World War Two erupted, and with his father, who survived Nazi internment at Buchenwald. Many other Kindertransport children were less lucky.

Foner, whose original name was Heinz Lichtwitz, was taken from Berlin to the Welsh city of Swansea in 1939, two years after his mother committed suicide – a victim, he believes, of despair at the doom gathering around Europe’s Jews.

Foner received postcards from his father until the war cut off mail contact. In mid-1942, the elder Foner told his son in a final letter delivered through the Red Cross: “Our destiny is very uncertain.” Months later, he was murdered at Auschwitz.

The correspondence was included in Yad Vashem’s Kindertransport exhibit, as well as in Foner’s memoir, a copy of which he said he hoped to present to Prince William.

“I was a six-year-old refugee kid, and here I am giving a book I wrote, to honour my father, basically, to a member of the royal family,” he told Reuters. “It’s great honour for me to be able to say thank you, symbolically, to the British people who saved my life.”

Later in the day, the prince will see Prime Minister Benjamin Netanyahu and President Reuven Rivlin before heading to Jaffa and Tel Aviv on the Mediterranean coast to meet young people participating in a football-based youth programme.

During the visit, which Britain has described as non-political, William is also scheduled to meet Palestinian President Mahmoud Abbas and Palestinian youngsters in the occupied West Bank.