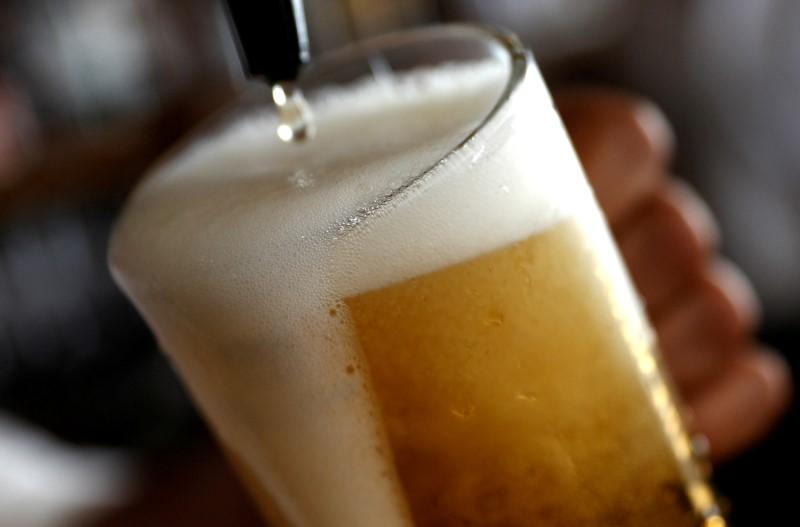 LONDON (Reuters) – A shortage of carbon dioxide has hit Britain’s biggest brewers and soft drink makers, disrupting production just as drinkers’ thirst peaks due to a heatwave and a World Cup soccer tournament in which England is doing unusually well.

FILE PHOTO: A pint of beer is poured into a glass in a bar in London, Britain June 27, 2018. REUTERS/Peter Nicholls/File Photo

Hot weather and a build-up of beer stocks ahead of the World Cup lifted CO2 demand from brewers just as the gas was in short supply due to production shutdowns at chemical factories that produce it as a byproduct.

The CO2 shortage is also affecting producers of meat and frozen foods, which could put a chill on summer barbecues.

CO2, well-known as a greenhouse gas, is also used to stun animals before slaughter, to increase the shelf-life of foods and to make dry ice, which keeps frozen food cold in transit.

Dutch brewer Heineken last week warned pubs about potential supply problems. It said on Wednesday it was working around the clock to get beers to customers as quickly as possible.

Coca-Cola European Partners has slowed some production of soft drinks.

Both companies say they are still able to meet demand from customers, though Tesco’s retail distribution business Booker said it was experiencing “supply issues” on soft drinks and beer. It did not specify on which brands.

British poultry processors have already warned that dwindling CO2 supplies could force them to slow or stop production, since more than half of them use the gas to stun birds before slaughter. The same is happening with pork processors.

Meat company Tulip on Wednesday halted production at its Brechin site, Scotland’s largest pig abbatoir, after using up its stock of CO2. The company said it was extremely concerned about a lack of information from the gas sector about when the situation would be rectified.

FILE PHOTO: A CO2 canister is seen connected to a drinks machine in a bar in London, Britain June 27, 2018. REUTERS/Peter Nicholls/File Photo

“There’s been no update from the gas industry other than what was communicated at the beginning of last week,” said spokesman Nick Purnell. “In all honesty we’re not confident things are going to be back up and running as hoped for the beginning of next week.”

Air Liquide is the biggest of the industrial gas suppliers that buy carbon dioxide from the chemical sector and sell it to food and drink makers. The French company said the shortage was the result of “exceptional and simultaneous production shutdowns” of raw gas production units.

“Our teams are fully mobilised to try to meet our food and industrial customers needs in the context of a temporary shortage beyond our control,” it said.

Rival Linde in Germany said it was trying to keep up with customers’ demands by shifting European supply logistics.

Industrial CO2 is produced as a by-product of making ammonia used in fertilizer production. Fertilizer production typically peaks in winter to build stocks for spring farming, so plant maintenance-related shutdowns are common in summer.

What is different this year, according to the British Poultry Council, is lower-than-average production of ammonia, and also therefore CO2, due to lower ammonia prices. The Council also said at least one gas supply company has had technical difficulties that had restricted production further.

The CO2 supply squeeze comes as Britain has basked in unseasonably warm weather since late April.

The UK Met Office said the average daily maximum temperature of 17 degrees Celsius (62.6°F) had made May 2018 the warmest May since records began in 1910 and the sunniest since 1929.

A heatwave is also forecast for the sports-packed days ahead. England will play its third World Cup match against Belgium on Thursday before they go into the knock-out round with a match next Monday or Tuesday.

Sonneville predicted the shortage would only really start to hit drinkers in the coming days, as wholesalers, distributors and retailers work through existing inventories.

Supermarket chain Morrisons said online sales of frozen foods were being affected and apologized on its website if some products were out of stock. Market leader Tesco said it had no availability problems or restrictions.

Of the brewers, some analysts see Heineken, the world’s second biggest, as likely to be the most affected.

The Dutch company warned pubs of low stock levels last week but said it has been able to source carbon dioxide elsewhere in Britain and from other parts of Europe as its three UK breweries work at full capacity.

Bernstein analyst Trevor Stirling said as long as the shortage was confined to the United Kingdom and only a week or so worth of sales were lost, it was unlikely to materially hurt group profits.

Anheuser-Busch InBev said it was not having any issues because it uses CO2 recovery systems in brewing that allow it to be mainly self-sufficient.

Carlsberg, and U.S. brewer Molson Coors, both have similar systems. Still, Carlsberg said it was exploring alternatives in case the shortage becomes a longer-term problem It also said it was ready to share carbon dioxide from other sites around northern Europe.

The British Beer and Pub Association said last week that the shortage might last at least for the next few weeks.

“Whilst some members may still be receiving supplies of CO2, this shortage will undoubtedly impact on those many smaller suppliers who distribute locally but who will be supplied in turn by the national producers,” the trade group said.

The British Soft Drinks Association said the shortage was impacting a wide range of businesses across the food and drink sector.

Additional reporting by Phil Blenkinsop in Brussels, Stine Jacobsen in Copenhagen and Joern Poltz in Munich. Editing by Jane Merriman