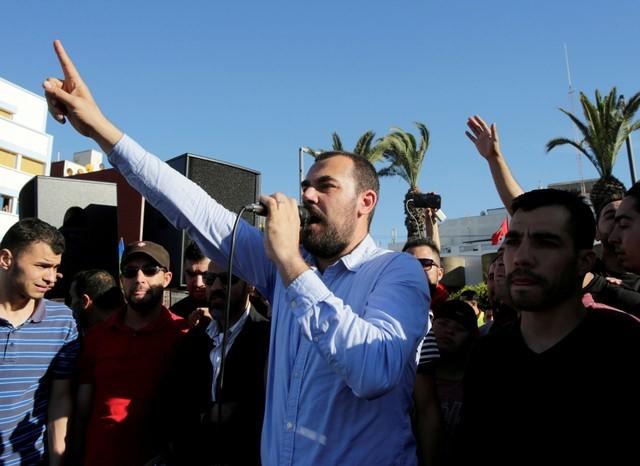 RABAT (Reuters) – The Moroccan leader of protests over economic and social problems in the Rif region and the northern city of Al Hoceima was sentenced to 20 years in prison on Tuesday by a Casablanca court.

FILE PHOTO: Moroccan activist and the leader of the protest movement Nasser Zefzafi gives a speech during a demonstration in the northern town of Al-Hoceima, seven months after a fishmonger was crushed to death inside a garbage truck as he tried to retrieve fish confiscated by the police, in Al-Hoceima, Morocco May 18, 2017. REUTERS/Youssef Boudlal/File Photo

Nasser Zefzafi, who is about 39 years old, was arrested in May 2017 and transferred to a prison in Casablanca after organizing demonstrations in his hometown of Al Hoceima in what came to be called as “Hirak al Chaabi” in Arabic or “popular movement.” He was charged with undermining public order and threatening national unity.

As part of the same verdict, Nabil Ahmijeq, Wassim El Boustani and Samir Aghid were also given 20 years in prison while three others received a 15-year jail sentence.

Seven activists were sentenced to five years in prison and six others were handed a 10-year jail sentence.

FILE PHOTO: Moroccan activist and the leader of “Hirak” Nasser Zefzafi gives a speech during a demonstration against injustice and corruption in the northern town of Al-Hoceima, Morocco, May 18, 2017. REUTERS/Youssef Boudlal/File Photo

Seven activists were sentenced to three years in prison while 12 defendants received a two-year prison sentence and an activist was given a one-year suspended prison sentence.

“These are unfair sentences,” Bouchra Rouis activists lawyer told Reuters by phone, adding that there will be an appeal against the ruling after consultation with the defendants.

The protests erupted after the gruesome death of fishmonger Mouhcine Fikri in October 2017, who was crushed inside a rubbish truck trying to recover fish confiscated by police.

The Al Hoceima demonstrations along with the protests that hit the mining town of Jerada in early 2018 have been the most intense since the 2011 unrest that had prompted King Mohammed VI to devolve some of his powers to an elected parliament.