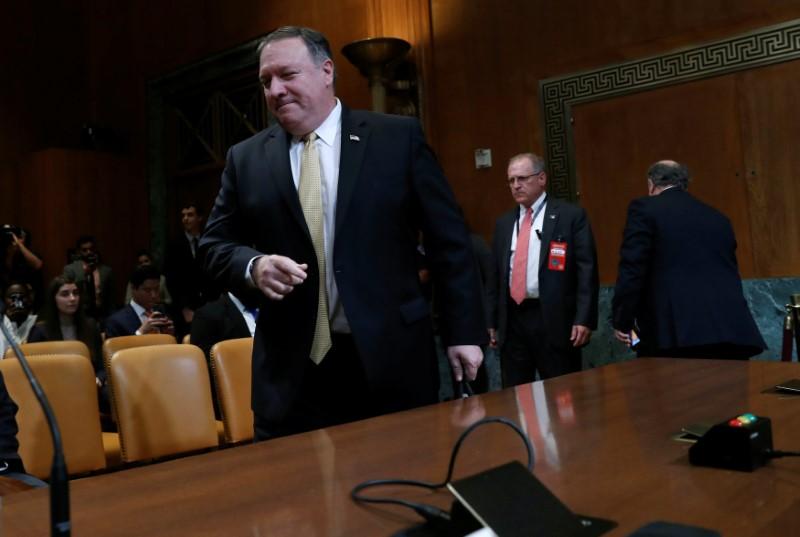 U.S. Secretary of State Mike Pompeo arrives to testify before a Senate Appropriations Subcommittee hearing on the proposed budget estimates and justification for FY2019 for the State on Capitol Hill in Washington, U.S., June 27, 2018. REUTERS/Leah Millis

“We’ve been pretty unambiguous in our conversations about what we mean when we say complete denuclearization,” Pompeo told a Senate Appropriations subcommittee hearing on funding for the State Department.

U.S. Secretary of State Mike Pompeo testifies before a Senate Appropriations Subcommittee hearing on the proposed budget estimates and justification for FY2019 for the State on Capitol Hill in Washington, U.S., June 27, 2018. REUTERS/Leah Millis

Trump has drawn some criticism from national security analysts for an agreement that emerged from his June 12 summit with Kim that had few details on how Pyongyang would surrender its nuclear weapons and ballistic missiles.

Pompeo said he would be leading the ongoing talks with Pyongyang, but declined to discuss details. “They’re watching this hearing,” he said.

Although Trump said last week that North Korea was in the process of returning the remains of U.S. troops missing from the 1950-1953 Korean War [nL1N1TN169], Pompeo said none had yet been handed over to the United States. He said he was optimistic the United States would begin receiving remains “in the not-too-distant future.”

FILE PHOTO: U.S. Secretary of State Mike Pompeo participates in a meeting with U.S. President Donald Trump and members of congress in the Cabinet Room about immigration at the White House in Washington, D.C., U.S., June 20, 2018. REUTERS/Leah Millis/File Photo

Pompeo also said he had seen “a modest amount” of backsliding from China on enforcing sanctions on North Korea.

“It is the set case that we have observed China not enforcing control over their cross-border areas as vigorously as they were six or 12 months ago,” he said, but said that was in comparison to what had been an all-time high.

Pompeo was also questioned about Trump’s saying after the summit with Kim that North Korea no longer posed a nuclear threat, an assertion questioned by analysts and mocked by Democrats.

Pompeo defended the statement, saying Trump had reduced the threat, by reducing tensions. “I think his point was a fair one. For the moment, we have reduced risk,” Pompeo told the subcommittee.