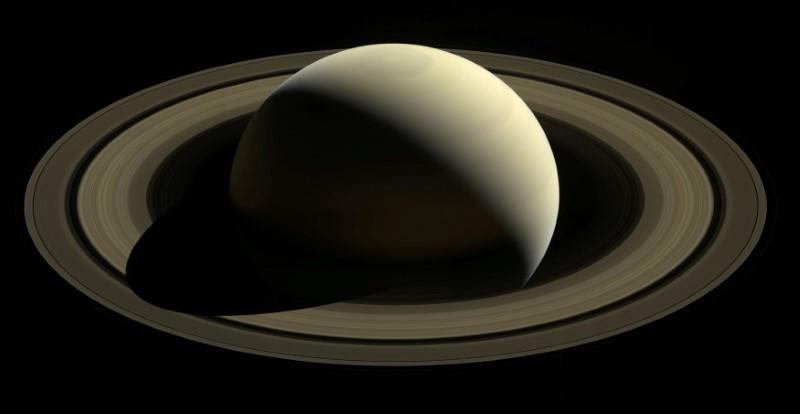 BERLIN (Reuters) – Complex organic molecules have been discovered originating from one of Saturn’s moons, Enceladus, adding to its potential to support life, researchers said on Wednesday.

FILE PHOTO: One of the last looks at Saturn and its main rings as captured by Cassini. Images taken October 28, 2016 and released September 11, 2017. NASA/JPL-Caltech/Space Science Institute/Handout via REUTERS

The Cassini spacecraft first flew close to the ice-covered moon in 2005 as part of a mission to gather data on Saturn that will be analyzed for years to come.

A team led by Frank Postberg and Nozair Khawaja of the University of Heidelberg in Germany said they had identified fragments of large organic molecules in ice grains that were ejected from geysers through cracks in the moon’s icy exterior.

FILE PHOTO: The spacecraft Cassini is pictured above Saturn’s northern hemisphere prior to making one of its Grand Finale dives in this NASA handout illustration obtained by Reuters August 29, 2017. NASA/Handout via REUTERS

Their findings were published in the Nature journal.

“It is the first ever detection of complex organics coming from an extraterrestrial waterworld,” Postberg was quoted as saying in a statement on the European Space Agency’s website.

The Enceladus findings come after data earlier this month showed organic compounds on the surface of Mars and seasonal fluctuations of atmospheric methane, marking some of the strongest evidence ever that Earth’s neighbor may have harbored life.

Cassini has previously detected lightweight organic molecules at Enceladus but the newly found fragments are much larger. Such large molecules can only be created by complex chemical processes including those related to life, ESA said.

FILE PHOTO: A woman looks through a spectroscope underneath a full-size engineering model of NASA’s Cassini spacecraft that plunged into Saturn’s atmosphere, at the California Science Center in Los Angeles, California, U.S., September 15, 2017. REUTERS/Lucy Nicholson

“This is the most recent in a long series of discoveries made by Cassini that have been painting Enceladus as a potentially habitable water-world,” ESA said.

However, while this indicates that Enceladus may have conditions that could allow for life, organic compounds can also arise from other sources, such as from meteorites.

Postberg said the fragments could come from hydrothermal activity deep within the moon.

“In my opinion the fragments we found are of hydrothermal origin, having been processed inside the hydrothermally active core of Enceladus: in the high pressures and warm temperatures we expect there, it is possible that complex organic molecules can arise,” he said.

The Cassini joint mission between NASA, ESA and the Italian space agency came to an end in 2017.