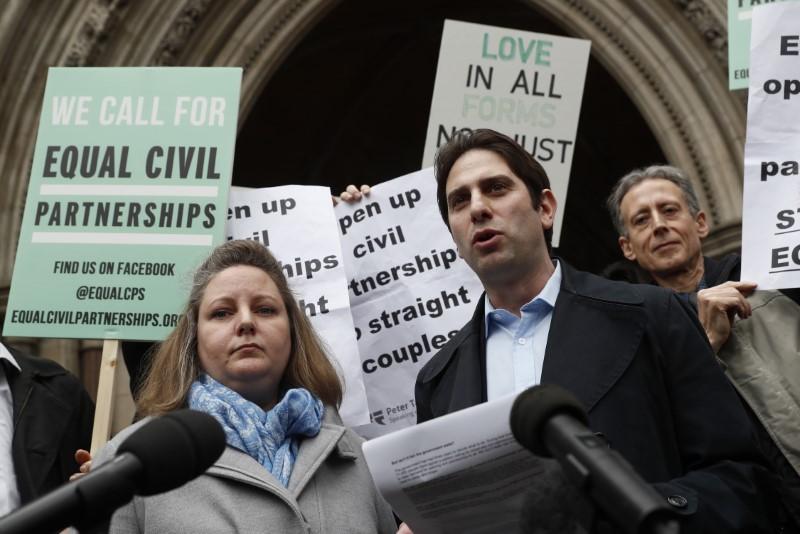 LONDON (Reuters) – Britain’s Supreme Court has ruled in favour of allowing a heterosexual couple the right to enter into a civil partnership, previously a union only eligible to those of the same sex.

FILE PHOTO: Rebecca Steinfeld (L) and Charles Keidan speak to members of the media as they leave the Royal Courts of Justice in central London, Britain, February 21, 2017. REUTERS/Stefan Wermuth

The unanimous ruling by Britain’s top judges followed an appeal brought by a British couple who said that the law discriminated against heterosexuals like them who wanted a civil partnership rather than to be married.

The couple, Rebecca Steinfeld and Charles Keidan, have fought for years to have a civil partnership because they object to marriage due to what they call its patriarchal nature.

Civil partnerships were introduced in Britain in 2004, giving gay couples similar legal rights to those enjoyed by married heterosexuals.

Since 2014, same-sex marriage has also been legal in England, Wales and Scotland, meaning gay couples could choose to get married or enter into a civil partnership, but marriage has to date been the only option available to heterosexual couples.

The ruling does not mean the government is obliged to change the law but it makes it more likely that will happen, and campaigners will use the decision to push for that.

Prime Minister Theresa May told parliament on Wednesday she would consider the ruling with “great care,” without elaborating.