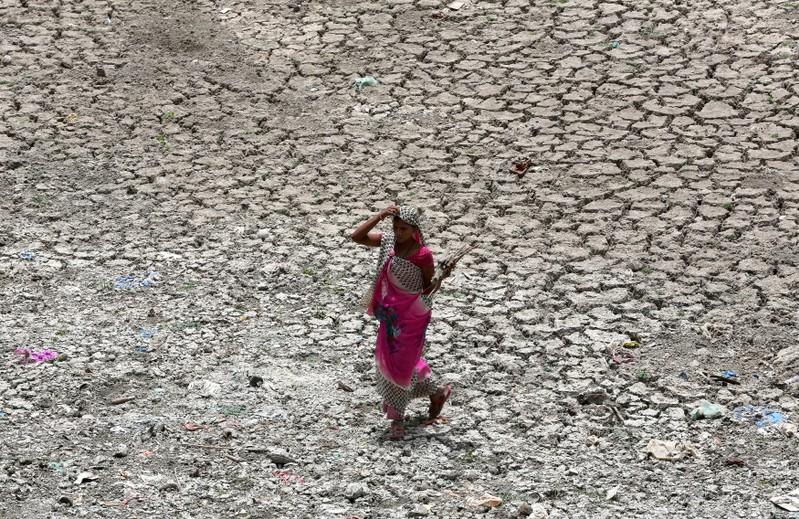 NEW DELHI (Reuters) – Changes in temperature and rainfall will impact almost half of South Asia in the coming decades, reducing economic growth in one of the world’s poorest regions, the World Bank said.

FILE PHOTO: A women carries firewood as she walks through a dried-up portion of the Sabarmati river on a hot summer day in Ahmedabad, India, May 16, 2018. REUTERS/Amit Dave/File photo

A World Bank report released on Thursday analyses two scenarios – “climate sensitive”, based on collective action by nations to limit greenhouse gas emissions, and “carbon intensive”, which assumes no action on climate change.

The report combines future changes in temperature and rainfall with household survey data linking living standards to weather conditions for the first time.

More than 800 million people now live in areas predicted to become moderate-to-severe “hotspots”, or affected areas, by 2050 under the carbon intensive scenario, with India accounting for almost three quarters of them, the report said.

Moderate hotspots are areas where projected consumption spending declines by 4-8 percent and severe ones are where the drop exceeds 8 percent.

“There seems to be some kind of correlation between climate hotspots and water stressed areas,” Muthukumara Mani, a World Bank economist, said.

The World Bank’s expectation of about half of India living in moderately or severely-affected areas by 2050 tallies with a federal think tank’s report two weeks ago. This warned that 600 million Indians could suffer high to extreme water stress as the country faces the worst long-term water crisis in its history.

Rising temperature and changing monsoon rainfall patterns from climate change could cost India 2.8 percent of gross domestic product (GDP) and depress the living standards of one in every two Indians by 2050, the World Bank report said.

In terms of GDP per capita, it predicted changes in average weather would hit Bangladeshis living in severe hotspots the hardest among South Asians. It projected a 14.4 percent fall in income by 2050 for them. The comparative figures for Sri Lanka and India were 10.0 percent and 9.8 percent respectively under the carbon intensive scenario.

Nepal and Afghanistan, as well as hilly areas in India, may benefit from the weather changes because of their colder climates. However, their extensive reliance on streams fed by melting snow would mean that higher temperatures may affect timing and availability of water resources.

“Climate changes will impact you based on where you live and what you do,” said Mani, who is also the main author of the report.

Inland areas would be more affected than coastal areas and mountainous regions, and the most vulnerable would be those dependent on agriculture as their main livelihood, he added.

Targeted policies such as enhancing educational attainment, reducing water stress and improving opportunities in the non-agricultural sector could reduce the impact of climate change on living standards, the report added.