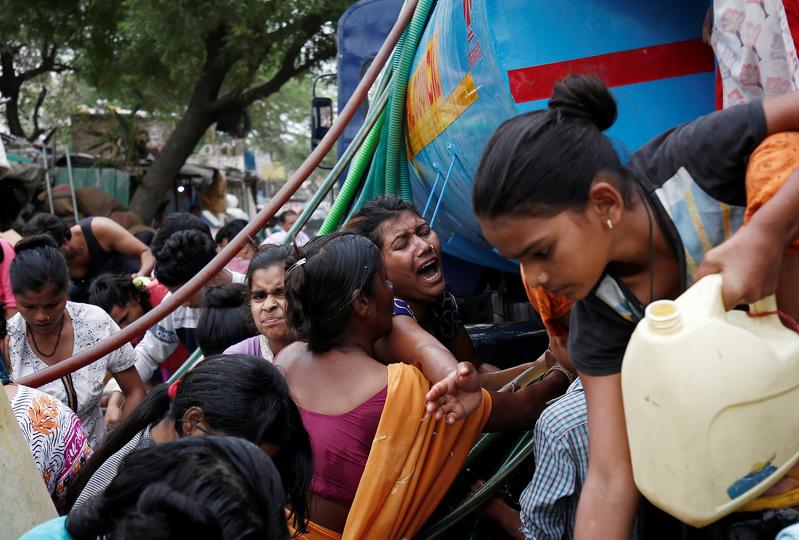 NEW DELHI (Reuters) – Through the long summer months in India’s capital, tens of thousands of people have cut back on daily showers and laundry because of a shortage of water that has led to fighting in some areas in which three people have been killed.

Monsoon rains forecast for this week in Delhi will signal an end to the summer, but India faces the worst long-term water crisis in its history and millions of lives and livelihoods could be at risk, a think tank chaired by Prime Minister Narendra Modi has said in a report.

“We’re in dire straits and we need to change our approach to tackle the crisis, otherwise the situation will become so grim that the shortages will knock down our GDP by 6 percentage points in over a decade,” Avinash Mishra, a joint adviser at the Niti Aayog think tank, told Reuters.

India’s water consumption is projected to touch 843 billion cubic meters (bcm) by 2025 against the current availability of 695 bcm. By 2050, the country will need 1,180 bcm of water, and at the same time groundwater is being depleted at unsustainable rates, the report said.

Almost every sector in the economy is dependent on water, especially agriculture, which sustains two-thirds of India’s 1.3 billion people.

Delhi, a sprawling city of 20 million people, is symptomatic of the nationwide water shortage. Summer temperatures can soar as high as 45 degrees Celsius and areas outside the main government districts suffer badly, when taps run dry and groundwater levels fall.

Both Delhi and Bengaluru, India’s software capital, will run out of groundwater by 2020, the Niti Aayog report said.

Sushila Devi, whose husband and son died after a brawl with neighbours over water in March, stands outside her house in New Delhi, India, June 27, 2018. Picture taken June 27, 2018. REUTERS/Adnan Abidi

Fights frequently break out in some Delhi neighborhoods when government-run water tankers arrive and people, mostly women and children, converge with their cans and buckets.

In one such incident in Wazirpur in northwest Delhi, Lal Bahadur, 60, died after a brawl with neighbors over water in March. His 18-year-old son, Rahul, who also suffered serious injuries in the scuffle, died in hospital a month later.

Such fighting is frequent because one water tanker a day is like a drop in the ocean in this bustling suburb of daily-wage workers, said a police official involved in investigating Bahadur’s death. The official did not want to be identified in line with government policy.

“I lost my husband and my son for something as basic as water,” said a teary-eyed Sushila Devi, Bahadur’s wife. “The culprits are out on bail granted by a court and I don’t have the means to pursue the case further”.

Once in a while, private water tankers come to the area but these suppliers charge a hefty price, citing the cragged and unmetalled road that connects Sangam Vihar to the city.

“We’re about to run out of water,” said Bimla Devi, a woman who lives there. “My family of four could survive on the supply that we last received on June 6 because we decided to give up the luxury of having daily showers and doing daily laundry”.

She said she buys bottled water for drinking.

Earlier this month, Kishan Bhadana, 45, brother of a local politician, was shot dead after a tiff over laying water pipelines in Sangam Vihar.

Government officials concede that water supply is skewed in Delhi, with a densely populated area like Sangam Vihar receiving hardly 30-40 liters of water per person per day against the standard requirement of 150 liters.

Municipal authorities ensure that water supplies to sparsely populated central New Delhi, the seat of power where top government ministers and civil servants live, remain at about 375 liters per person per day, way above the average.

The city’s main army cantonment area also gets around 375 liters of water per person per day.

Elsewhere, taps often run dry because of leaky pipes while thefts lead to a nearly 50 percent loss in the supply of water to individual households. Once stolen, the water is sold at a premium by Delhi’s so-called tanker mafia.

Out of 27 administrative units in Delhi, ground water resources in more than half are “over exploited”, with only five considered “safe” by the Central Ground Water Board.

A businessman in Vasant Kunj, an upscale neighborhood at the foothills of the Aravali mountain range, is planning to dispose of his 2.5 acre farm because he finds it difficult to get water to maintain his large property.

The businessman, who did not wish to be named, said he needs at least 30,000 liters of water daily for upkeep, which has become a luxury now.

“Extensive studies have suggested that in Delhi we end up using 120 percent of the ground water recharge every year. That shows the severity of the situation in the capital,” said Mishra of Niti Aayog.