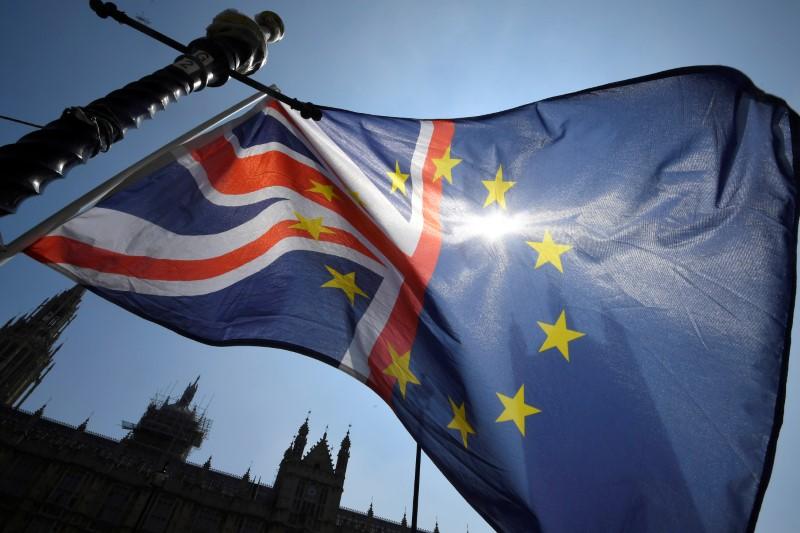 LONDON (Reuters) – European leaders told Prime Minister Theresa May on Thursday to soften some of her red lines on Brexit, warning her that time was running out to prevent Britain crashing out of the European Union without a deal.

A combined United Kingdom and European Union flag flies outside the Palace of Westminster in London, Britain, June 28, 2018. REUTERS/Toby Melville

At an EU summit focused more on a crisis over migration than on Brexit, the region’s leaders expressed rising frustration over the lack of progress in the talks, just nine months before Britain is due to leave.

May has hesitated to spell out detailed plans for Britain’s departure from the EU because of divisions in her ruling Conservative Party and government over the terms of Britain’s biggest foreign policy shift in almost half a century.

“We did expect that we would make more progress, or any progress, at this summit in June … That hasn’t been,” Irish Prime Minister Leo Varadkar told reporters after arriving in Brussels.

“We, as 27 member states, are willing to be more flexible but, in order to be flexible, the United Kingdom needs to soften some of its red lines.”

His comments that Ireland would prepare ports and airports for a so-called “no deal” Brexit sent the euro lower against the dollar, and increased pressure on the British leader to start pushing the talks forward.

MAY HOPES FOR JULY CABINET AGREEMENT

May has promised to resolve differences among her top team of ministers at a meeting early next month and intends to present a policy document setting out the government’s aims for a future partnership after that.

But she has so far stuck to what the EU called her “red lines” – to leave the bloc’s single market and customs union.

“Both sides are keen to continue that work at a faster pace than we have done up till now and certainly we’d welcome that,” she told reporters in Brussels.

“We have been setting out throughout these negotiations our position and, of course, at every stage, we have come to agreements with the European Union on issues which we discussed,” said May, who later received a Belgian soccer shirt from Prime Minister Charles Michel as England prepared to take on Belgium in the World Cup.

But her government’s indecision has prompted several large companies with major operations in Britain to warn the government that a disorderly Brexit would hurt their businesses and could put thousands of jobs at risk.

EU officials have also urged Britain to speed up its decision-making so that a withdrawal deal and agreement on future ties can be reached by October, to give member states time to ratify it before ‘Brexit Day’ in March.

In the draft conclusions, they will urge Britain to provide “realistic and workable proposals” on its future relationship with the bloc and leave the door open for London to change its mind on some of its “red lines”.

“I’m not losing patience, but time is getting shorter and shorter to come to an agreement,” Dutch Prime Minister Mark Rutte said. “I do understand that it is difficult to come to agreements within her cabinet and within the UK parliament, but she has to.”