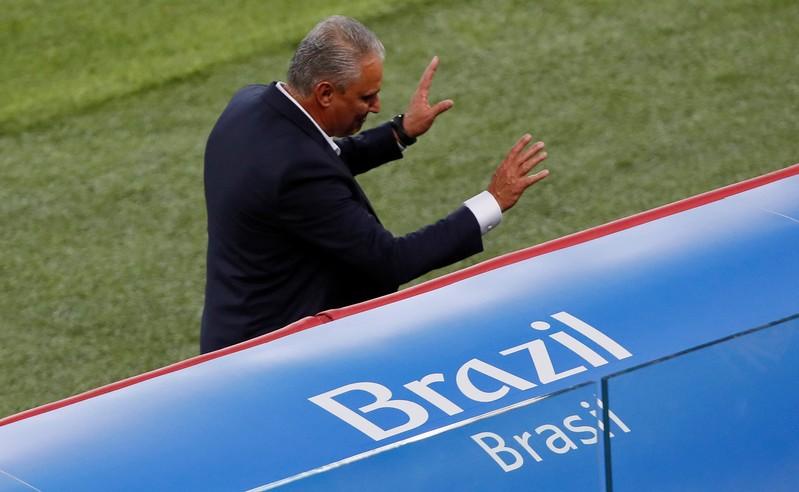 SOCHI, Russia (Reuters) – Brazil’s relatively straightforward passage to the last 16 has created optimism among fans betting on a sixth World Cup title but coach Tite is using his characteristic restraint to prevent over-confidence among his players.

With champions Germany out, Argentina only scraping through, and Spain in turmoil, many see Brazil as the clear favorites to lift the World Cup in Moscow on July 15.

But moments after they beat Serbia 2-0 to secure a quarter-final date with Mexico, the wily coach was once again playing down expectations.

“Expectations? We don’t live by expectations, we live by reality,” Tite said. “(We live by) a team that mentally deals with the pressure, is balanced, that has replacement parts for important moments.”

“You have to have a strong team. If the players didn’t have all this preparation then we’d surely not see this kind of performance.”

“Your situation,” he told reporters, “like gamblers, is not our situation. Ours is looking to grow.”

Brazil’s performance against Serbia was their best so far and guaranteed them a date with Mexico in Samara on Monday.

Tite revealed Brazil’s first division clubs had helped the national side by having their performance analysts research all 32 nations in the tournament and write detailed reports for his backroom staff.

That assistance will be crucial against a talented but inconsistent Mexican side that have gone from beating Germany 1-0 in their opener to losing 3-0 to Sweden in their final group game.

“We are going to begin studying on the plane (back to our base camp”,” Tite’s assistant Cleber Xavier told reporters.

“They are a strong rival that beat Germany and Korea and qualified at the expense of Germany. For us, the thing is to know Mexico inside out so we can outline our expectations.”