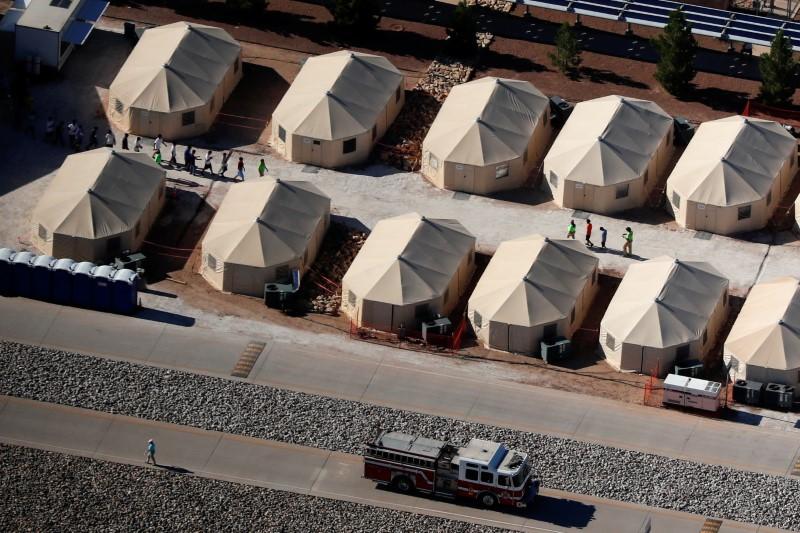 WASHINGTON (Reuters) – The U.S. military has been asked by the Department of Homeland Security to house and care for immigrant families totaling up to 12,000 people, the Pentagon said on Wednesday, in the latest sign the military is being drawn into a supporting role for President Donald Trump’s immigration policies.

FILE PHOTO: Immigrant children walk in single file between tents in their compound next to the Mexican border in Tornillo, Texas June 18, 2018. REUTERS/Mike Blake

The Pentagon said in a statement that the military had been asked to provide the capacity to house 2,000 people within 45 days.

If facilities were not available, semi-separate, soft-sided camp facilities capable of sheltering up to 4,000 people were to be constructed at three separate locations, the Pentagon said.

In the face of outrage at home and abroad over his crackdown on illegal immigration, Trump was forced last week to abandon his policy of separating children from parents who are apprehended for illegally crossing the U.S.-Mexico border.

The Pentagon said the Department of Homeland Security preferred the facilities for migrants be in Texas, Arizona, New Mexico or California for access and supervision and to comply with the so-called Flores settlement provision that reasonable efforts be made to place minors in the geographic area where the majority were apprehended.

The 1997 Flores agreement set policy for the detention of minors in the custody of immigration officials.

On Monday, Defense Secretary Jim Mattis said the military was preparing to house immigrants at Fort Bliss in El Paso, Texas, and Goodfellow Air Base in San Angelo, Texas.

The U.S. military, and Mattis in particular, have stressed that it is simply providing logistical support to the Department of Homeland Security, which deals with immigration issues.

Last week, the U.S. military said it had been asked by the government to get ready to house up to 20,000 immigrant children.