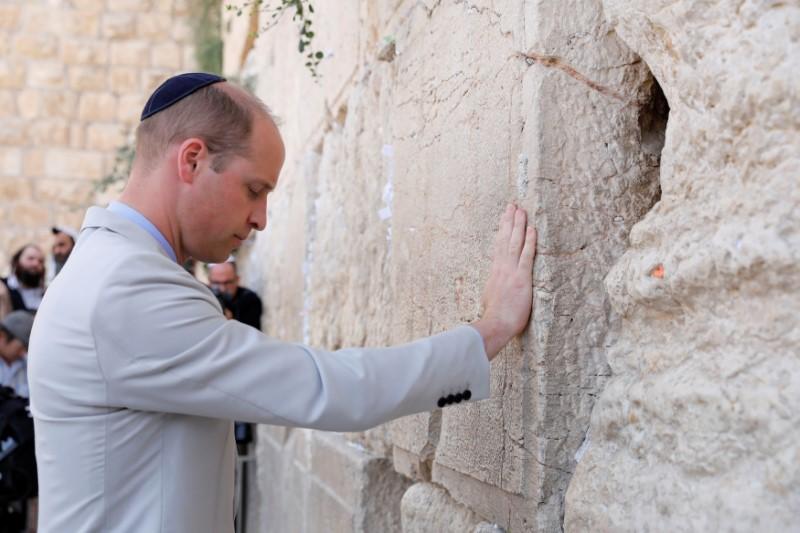 JERUSALEM (Reuters) – Britain’s Prince William toured Jerusalem’s most sacred and sensitive sites on Thursday, wrapping up a politically delicate visit that both Palestinians and Israelis, locked in a lengthy conflict, were able to embrace.

Assuring Palestinians they had not been forgotten and ending what Israelis had seen as an undeclared British boycott of official visits to their country by the royal family, William made no evident missteps in following an itinerary carefully scripted for balance.

Billed as non-political, the four-day tour of Israel and the occupied Palestinian Territories was an opportunity to show goodwill and voice hopes for peace in areas Britain ruled from 1917 to 1948, the year of Israel’s creation.

Embarking on a visit of Muslim, Jewish and Christian holy places in Jerusalem, William shook hands with clerics and then entered Islam’s Dome of the Rock and al-Aqsa mosque.

They are on a site revered by Muslims as the Noble Sanctuary and by Jews as the Temple Mount, where Biblical temples once stood.

Minutes later, accompanied by Jewish rabbis, William approached the Western Wall, at the foot of the sacred hilltop, through a passage formed by police barricades that held back a crowd of onlookers.

Wearing a skullcap and following a Jewish tradition of offering a written prayer at the wall, he placed a note between its stones, rested the palm of one hand against them and leaned forward in silent reflection.

Separately, he wrote in the Western Wall’s official guest book: “May the God of peace bless this region and all the world with peace.”

William then visited the Church of the Holy Sepulchre, another popular stop for pilgrims and where many Christians believe Jesus was crucified and buried.

The holy sites he toured are in East Jerusalem, captured by Israel in the 1967 Middle East war and annexed in a move that has not won international recognition. Palestinians want East Jerusalem as the capital of a state they seek in the West Bank and Gaza Strip.

William’s trip, undertaken at the behest of the British government, was the first official visit by a senior member of Britain’s royal family to Israel and the Palestinian Territories.

Until now it had been British policy not to make an official royal visit until the Israeli-Palestinian conflict was resolved.

Britain gave no detailed explanation for the change of tack, which coincided with Israel’s 70th anniversary.

Before visiting the shrines, William – second in line to the throne – made a pilgrimage to the Jerusalem tomb of his great-grandmother, Princess Alice, who was honoured by Israel for sheltering Jews in her palace in Nazi-occupied Greece during the Holocaust.

Princess Alice of Battenberg and Greece, who was Queen Elizabeth’s mother-in-law, is buried in a crypt in the Russian Orthodox Church of Mary Magdalene on the Mount of Olives outside Jerusalem’s Old City.

A devout Christian, she died in London in 1969 and had asked to be buried in Jerusalem.

In a visit on Wednesday to the West Bank, William met Palestinian President Mahmoud Abbas and toured a refugee camp, on a day that also took him to the Israeli coastal city of Tel Aviv. Israel’s Benjamin Netanyahu hosted William at the prime minister’s residence on Tuesday.

At a gathering of Palestinian civil society, business and religious leaders in Jerusalem on Wednesday, the prince spoke of the “very powerful experience” of meeting Palestinians in the West Bank.

“My message tonight is that you have not been forgotten,” he said.”

However, one Palestinian outside a clinic William visited voiced anger at the legacy of Britain’s colonial-era involvement in the Holy Land, citing the 1917 Balfour Declaration.

In the document, the British government expressed its support for “a national home for the Jewish people” in Palestine.

There was also grumbling from an Israeli right-wing legislator after a British statement on William’s visit listed Jerusalem as being inside occupied Palestinian territory.

“Until we meet again, Prince Charming,” the British Embassy tweeted in Hebrew as William’s plane taxied for departure from Tel Aviv’s Ben-Gurion airport.