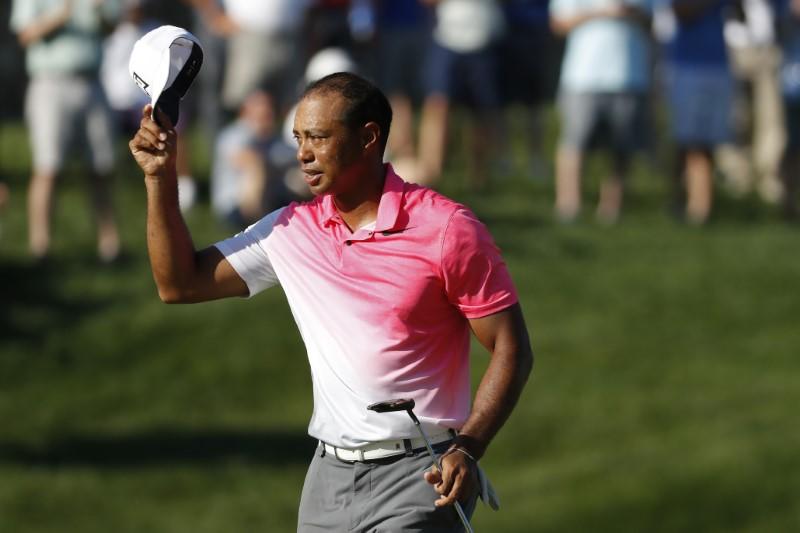 (Reuters) – Tiger Woods unveiled a new putter but hit a couple of poor tee shots in an even-par 70 that left him seven strokes behind first-round leaders Andrew Landry and J.J. Spaun at the Quicken Loans National in Maryland on Thursday.

Jun 28, 2018; Potomac, MD, USA; Tiger Woods of the United States acknowledges the crowd after making his par putt on the 128th green during the first round of The National golf tournament at TPC Potomac at Avenel Farm. Mandatory Credit: Geoff Burke-USA TODAY Sports

A double-bogey at the par-four sixth, where his drive hit a tree, set Woods back after he had missed some good birdie chances early at TPC Potomac at Avenel Farm just outside Washington’s Beltway ring road.

But the 14-times major champion hardly missed a shot over the closing holes as he started to find some form in what will be his only tournament appearance between the U.S. and British Opens.

“I shot about the score I should have shot. I didn’t really have anything going in the middle of the round,” Woods told Golf Channel. “Hit some poor tee shots and didn’t really give myself a chance.”

Woods, 42, used a new ‘mallet’ putter and while his only two birdies came from close range, he expressed satisfaction with the club, before heading to the practice green to hone his stroke.

“I rolled it well today, hit a lot of good putts early that didn’t go in,” he said.

Woods missed a 10-foot birdie putt at the fifth hole, but got a fortunate break at the next when his drive struck a tree but ricocheted back into a good lie.

However, he carved his second shot into a hazard en route to dropping two shots, and later found another hazard when he pulled his tee shot at the par-five 10th.

He was fortunate to be able to hack the ball back to the fairway and salvaged a par.

Co-leader Landry, who won the Texas Open in April but has struggled since, notched seven birdies in a seven-under 63, a score matched in the afternoon by Spaun.

“Irons have been struggling the last few months, distance control and direction, a mixture of everything,” Landry said.

“I hit the ball really well today. Finally starting to see some good stuff coming around.”

Fellow Americans Billy Horschel and Andrew Putnam were a stroke behind Landry and Spaun.

Reporting by Andrew Both; Editing by Greg Stutchbury