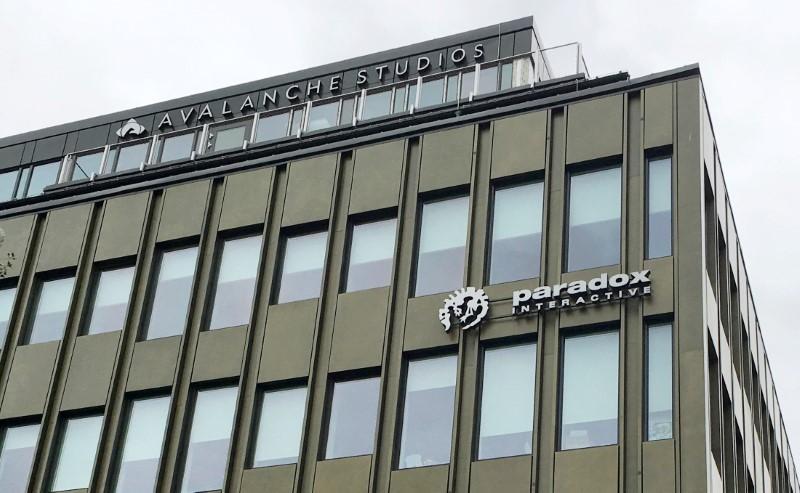 The logo of Paradox Interactive is seen on the building of company’s headquarters in Stockholm, Sweden June 29, 2018. REUTERS/Helena Soderpalm

Shares in the maker of games such as Stellaris have risen almost 500 percent since it listed two years ago, giving it a market value of nearly 21 billion crowns ($2.3 billion).

Paradox is part of a thriving cluster of gaming companies to spring out of Sweden, including Microsoft-owned Minecraft maker Mojang and Candy Crush maker King, which was bought by Activision Blizzard.

Incoming chief executive Ebba Ljungerud, who takes over from Paradox founder Fredrik Wester in August, told Reuters that game developers, publishers and studios were all potential targets, with the best growth opportunities in the sector in Asia and on mobile.

“Of course we are looking at them,” she said, adding that Paradox has a limited presence in both and that it was “digging where it stands” in terms of existing markets, of which the United States is the most important.

Ljungerud expects at least 10 percent of Paradox’s sales to be from mobile games by 2020, from next to nothing now. It has a fanbase of more than 2 million who play one of its games each month, and a registered user base in excess of 7 million.

Paradox’s console- and PC-based games, such as “Europa Universalis” and “Cities: Skylines”, often have an historical setting and are played on a world map.

Tencent has a 5 percent stake in Paradox, one of a number of bets made in recent years by the world’s largest gaming company by revenue and the biggest investor in other gaming firms, which has shifted from taking big stakes in proven winners to spreading its cash among early-stage game design firms.

“Expectations are high, that is obvious,” said Swedbank portfolio manager Carl Armfelt, who has an 8.6 percent holding in Paradox. “There’s the high valuation both on existing products and prospects they will make strategic deals.”

“Our cash is strong and we have a good valuation … so there is room (for acquisitions),” Ljungerud said.

Paradox was founded in 2003 by Wester, who at the age of 15 began importing Nintendo games from Taiwan.

Its competitors include Electronic Arts and Assassin’s Creed-maker Ubisoft, although Ljungerud said its was competing for people’s time rather than against other companies’ games.

Paradox, in which Wester retains more than a third and investment firm Spiltan holds a quarter, sees Tencent as an important partner, even before any expansion into China.

“It’s a giant market but it’s not crystal clear which of our games will fit in Asia. That said, it’s fantastic to have a partner like Tencent that knows the market really well, Ljungerud said.

A Tencent spokesman declined to comment specifically on its Paradox stake, but said:

“We have learned much from our investments in overseas gaming companies about local user preferences.”

Western firms receiving Tencent’s backing say it provides valuable strategic advice to break into China, according to Jefferies analyst Timothy O’Shea. Tencent has also shown a willingness to raise its stakes in promising game makers as other shareholders seek an exit.

Investors and analysts said Wester is unlikely to sell, but Spiltan could do so if it wants to diversify, analysts said.

However, Spiltan CEO Per Hakan Borjesson said his firm is a committed holder of Paradox, despite having sold off a tiny portion of its shares after the company’s latest results.

“We want to remain a main owner but we may consider selling parts of our stake,” he told Reuters. “As long as we own 50 percent together with Fredrik Wester we can keep control and decide on the future.”