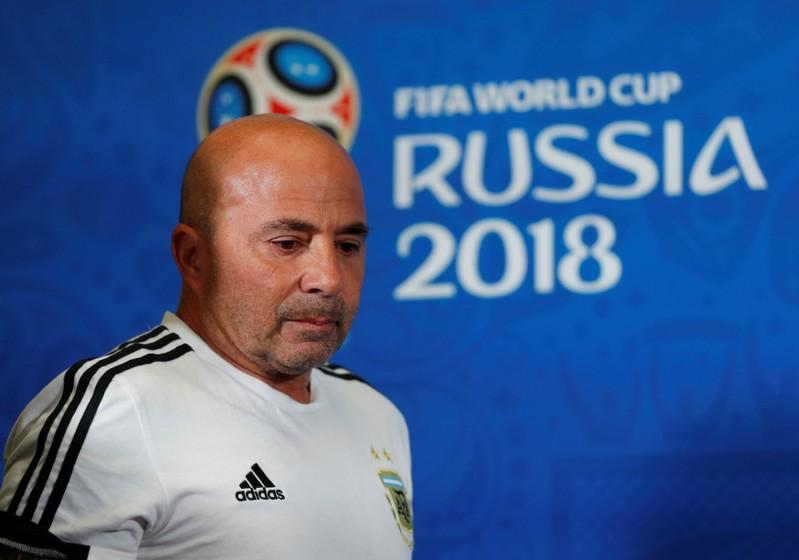 KAZAN, Russia (Reuters) – Argentina coach Jorge Sampaoli says he was informing rather consulting Lionel Messi in an exchange during the team’s last World Cup match that some media interpreted as him ceding authority to the celebrated forward.

Much has been made of the footage of the discussion before Sampaoli brought on striker Sergio Aguero as a substitute during the 2-1 win over Nigeria that secured Argentina’s passage to the last 16.

The 58-year-old coach, speaking on the eve of Saturday’s clash with France at the Kazan Arena, said the incident had been misinterpreted.

“I remember that point in time but everything I say to my players is personal and I will not divulge what was said,” he told a news conference.

“But it’s not how you characterized it, we had several options in attack and I was just communicating to him that we’d be using one of the strategies that we’d rehearsed.”

Sampaoli was unstinting in his praise of Messi, describing him as “the best player in the world” and a “genius”, but preferred to focus more on the display he expected from his whole team on Saturday.

“I dream of an Argentina that plays with passion but also dominates with the football,” he said.

“If we can’t control the ball, it could become a physical match, and that won’t suit us at all.

The coach said France’s characteristics of quick ball recovery and pace on the break through Antoine Griezmann and Olivier Giroud would make them particularly dangerous if Argentina were unable to dominate possession.

He also, however, thought that it was more than just five-times World Player of the Year on the Argentina side who could punish the French.

“I’m sure France has a plan to neutralize Leo and we have a plan to get the best out of him, let’s see whose plan works best,” he added.

“He’s the best player on earth but we also have other players that can cause France some problems.”

Sampaoli came under huge fire after Argentina drew 1-1 with Iceland in their first match in Russia and were thrashed 3-0 in their second by Croatia, all amid reports of unrest in their camp.

The former Chile coach said he had no plans to step down whether or not the twice world champions beat France to set up a quarter-final against Portugal or Uruguay.

“I have a contract,” he concluded. “I’m quite happy to be here despite what sometimes comes with this job and I will fight to be here as long as I can.”