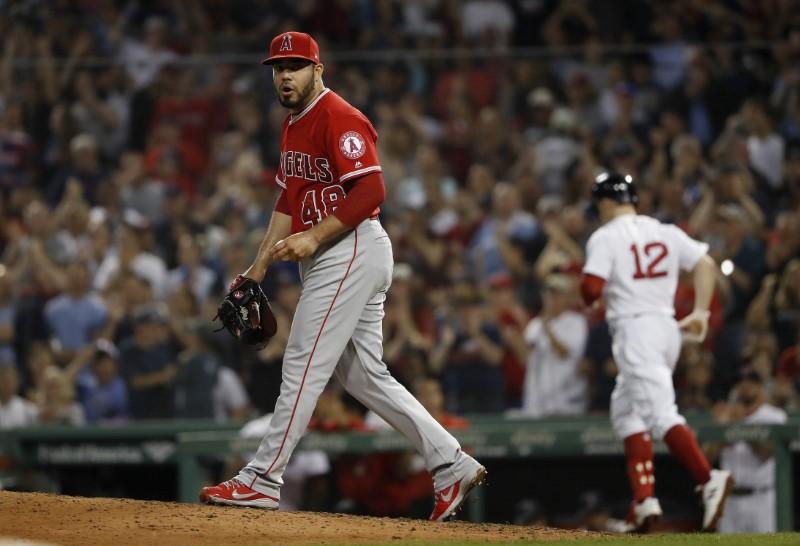 Brock Holt’s bases-loaded walk in the sixth inning scored the go-ahead run as the host Boston Red Sox swept the season series against the Los Angeles Angels with a 4-2 victory Thursday to cap a three-game set at Fenway Park.

Jackie Bradley Jr. clubbed a two-run home run and Rafael Devers added a solo shot as Boston won for the sixth time in seven games. Andrelton Simmons hit a solo homer and Albert Pujols drove in a run for Los Angeles, which has lost six in a row.

Boston won 9-1 in Tuesday’s opener and 9-6 on Wednesday. The Red Sox scored at least eight runs in each of their first five meetings with Los Angeles this season before Thursday and outscored them 49-12 in the season series.

Nola (10-2) allowed five hits and one run while striking out eight in an impressive 114-pitch performance. Rhys Hoskins had three hits while Maikel Franco and Jorge Alfaro each added two hits for the Phillies.

Tanner Roark (3-9) tossed six solid innings for the Nationals, giving up seven hits and two runs, one of which was earned. Roark threw 107 pitches, 62 for strikes. Trea Turner had a pair of hits for the Nationals.

DJ LeMahieu belted a go-ahead, two-run home run off Sam Dyson with one out in the top of the ninth inning to help visiting Colorado edge San Francisco and avoid a three-game sweep.

LeMahieu’s heroics came after San Francisco’s Alen Hanson had delivered a two-run double off Rockies relief standout Adam Ottavino in the eighth, giving the Giants an 8-7 lead and putting them three outs from a fifth straight win.

But Chris Iannetta, who entered the game as a pinch hitter in the seventh inning, recorded his second consecutive single to open the ninth against Dyson (2-2), setting the stage for LeMahieu, whose homer was his eighth of the season. The blown save was Dyson’s fourth of the season.

McCullers (9-3) allowed three hits, all singles, and two walks. McCullers recorded seven strikeouts, including 17 swings-and-misses on his curveball. Marisnick clubbed his seventh homer to left field off Rays left-hander Ryan Yarbrough (7-4) with one out in the fifth inning. Astros closer Hector Rondon earned his fifth save by striking out the side in the ninth inning.

Yarbrough allowed seven hits and one walk striking out four over 6 1/3 innings. He entered after reliever Ryne Stanek started the game with 1 2/3 scoreless innings. The Rays had their eight-game home winning streak snapped.

Addison Russell hit a home run and drove in four runs and Anthony Rizzo had a three-run double in a seven-run seventh inning as visiting Chicago rolled over Los Angeles.

Albert Almora Jr. added a home run, while Jason Heyward put the Cubs into the lead for good with an RBI double to open the Cubs’ big seventh inning. Rizzo had four hits and Javier Baez had three to give him nine in the past three games. Baez went 14-for-26 against the Dodgers this season.

Max Muncy and Justin Turner hit home runs for the Dodgers to give the club 53 homers in the month, tying a franchise record. The Dodgers are five off the major league record for a month with two games to play. The Cubs overcame a solid five-inning outing from the Dodgers’ Clayton Kershaw, as the left-hander made his second start since returning from the disabled list because of a back issue.

Dee Gordon scored the tie-breaking run in the top of the 10th inning thanks to a Baltimore error, and Nelson Cruz added an RBI single as visiting Seattle defeated Baltimore at Camden Yards.

The victory gave the Mariners a sweep of the four-game series. Seattle now has won four consecutive games while Baltimore has dropped five in a row in a season filled with injuries and frustration. The Mariners are 8-0 in extra-inning games this season.

The Mariners finished 1-for-18 in those situations but two Baltimore errors in the 10th helped them score the go-ahead runs. Mike Leake threw seven strong innings for the Mariners, giving up two runs on five hits with six strikeouts and one walk. For Baltimore, Jimmy Yacabonis, in his first career start, went four innings plus two batters and allowed two runs with six hits, striking out five and walking one.

Thames’ homer off Reds reliever Amir Garrett (0-1) was his 13th in 20 games against Cincinnati dating back to last season and made a winner of right-hander Junior Guerra (4-5) for the first time since May 14. Milwaukee also got a two-run home run from Jesus Aguilar. It was his 19th, moving him into a tie for first in the NL, and his 10th in June.

Rookie Jesse Winker hit his sixth home run, and Jose Peraza hit his fourth, and his second in two games, for the Reds, who led 2-0 and 4-2 before the Brewers came back. The Brewers lost left fielder to Christian Yelich in the first inning to a lower back injury.

Max Kepler had two hits and drove in the winning run with a bases-loaded walk in the 13th inning as visiting Minnesota edged Chicago at Guaranteed Rate Field in Chicago.

Logan Morrison, who homered earlier, scored the winning run after doubling off Hector Santiago (2-3) with two outs in the 13th. Shortstop Ehire Adrianza was intentionally walked and center fielder Jake Cave also walked to load the bases. Kepler then drove in the game-winning run when Santiago’s 3-2 pitch was high.

Alan Busenitz (2-0), the Twins’ seventh pitcher in the game, picked up the win with 1 2/3 innings of two-hit relief as Minnesota won for just the second time in seven games, snapping Chicago’s season-best-tying three-game win streak in the process.

Manaea (8-6) allowed two runs on five hits in Oakland’s 10th win in its last 12 games. A trio of relievers followed him, and Blake Treinen notched his 20th save by getting the last three outs. Lowrie had nine hits in the series, five for extra bases, and drove in five runs for Oakland, which has surged to six games over .500 during its hot streak.

Nicholas Castellanos hit a two-run homer for the Tigers, who have lost nine straight both overall and against Oakland dating back to last season. John Hicks added two hits.

Arizona right-hander Zack Greinke pitched seven scoreless innings, had two hits including an RBI single, stole a base and scored a run in Arizona’s victory over host Miami at Marlins Park.

Paul Goldschmidt had three hits and an RBI, and Nick Ahmed had two hits including an RBI double for the Diamondbacks, who finished 8-2 on a 10-game road trip and are 21-8 since May 28, the best record in the majors in that span. Greinke (8-5) gave up seven hits, all singles, struck out six and hit a batter while improving to 7-0 in 12 career appearances against the Marlins. He won three starts on the trip as his ERA dipped to 3.41, the lowest it has been since the first week of April.

JT Riddle had three hits and Bryan Holaday had two for the Marlins (32-50), the first National League team with 50 losses. They have lost three in a row and six of nine.