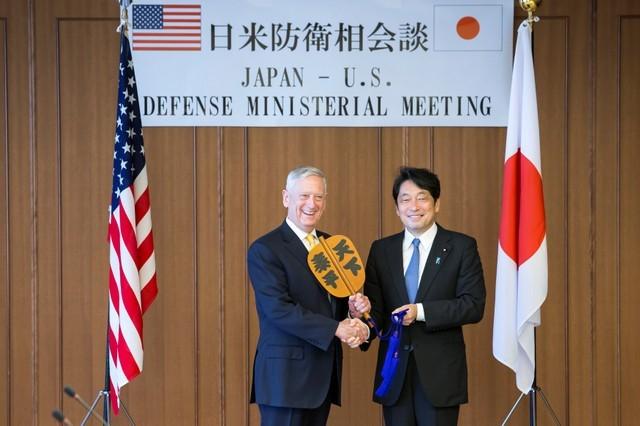 TOKYO (Reuters) – U.S. Defense Secretary Jim Mattis offered solidarity with Japan on Friday over Japanese abductees being held in North Korea, as he sought to reassure the close U.S. ally that Washington was mindful of its interests during talks with Pyongyang.

Japan’s Defense Minister Itsunori Onodera and U.S. Secretary of Defense James Mattis hold a Gunbai war fan during a photo session ahead of their meeting at the Ministry of Defense in Tokyo, Japan, June 29, 2018. Tomohiro Ohsumi/Pool via Reuters

Japan’s defense establishment was taken aback by the U.S. President Donald Trump’s recent decision to halt “expensive” military exercises with South Korea that have long been seen in Tokyo as a deterrent to North Korea’s threats.

Trump’s June 12 summit with North Korean leader Kim Jong Un in Singapore also did not appear to resolve Japanese security concerns about a missile program that Tokyo sees as a direct threat.

“We’re in the midst of very unprecedented negotiations right now with North Korea. But in this dynamic time, the longstanding alliance between Japan and the United States stands firm,” Mattis said.

In a sign of that commitment, Mattis, as he met Japanese Defence Minister Itsunori Onodera, repeatedly noted Japanese abducted by North Korea to train its spies, even noting a lapel pin worn by Onodera.

“I note with respect the blue lapel pin you wear, and we’re with you,” Mattis remarked as he sat down for talks at the defense ministry. He said the abductee issue was “always present in our deliberations.”

Japan has been pressing the United States to make the issue of the abductees a priority in its talks with North Korea.

Japan’s Defense Minister Itsunori Onodera and U.S. Secretary of Defense James Mattis review an honor guard ahead of their meeting at the Ministry of Defense in Tokyo, Japan, June 29, 2018. Tomohiro Ohsumi/Pool via Reuters

U.S. Ambassador William Hagerty hosted family members of Japanese abductees at his residence in Tokyo in April and regularly wears the pin and Trump raised the matter in Singapore.

Japan, which may seek direct talks with North Korea to discuss the return of any remaining abductees kidnapped during the 1970s and 1980s, has said it will not provide any economic aid to Pyongyang until the issue is resolved and normal diplomatic relations have been established.

Mattis, who is on the last stop of a week-long trip to Asia, offered similar reassurances about the U.S. alliance with South Korea during a stop in Seoul on Thursday.

He assured the South Korean government of an “ironclad” commitment to its security, including keeping U.S. troop levels there of around 28,500 soldiers.

In Seoul and Toyko, he also defended Trump’s decision to halt “war games,” saying it would help diplomats negotiate.

“This decision was taken to create space for our diplomats to negotiate strongly and increasing the prospects for a peaceful solution on the peninsula,” he said.

“At the same time, we maintain a strong collaborative defensive stance to ensure our diplomats continue to negotiate from a position of unquestioned strength.”

Japan, which hosts some 50,000 U.S. military personnel, including the biggest overseas concentration of U.S. Marines and a U.S. Navy carrier strike group, relies on the Washington for its defense.