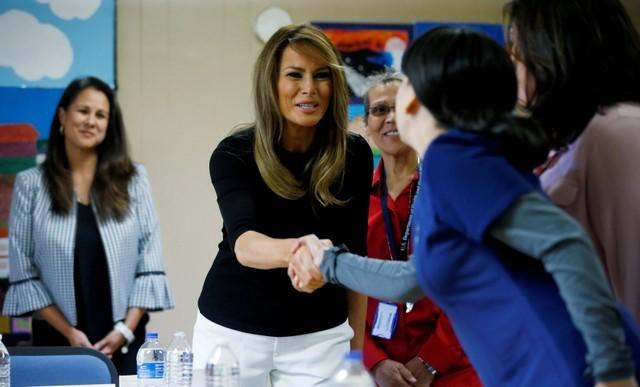 PHOENIX (Reuters) – First lady Melania Trump made a second trip on Thursday to view facilities housing children brought illegally across the border with Mexico and who have yet to be reunited with their parents after the Trump administration reversed its separation policy.

She also got a glimpse of the anger that erupted over the break-up of families due to the crackdown by her husband, President Donald Trump, on migrants at the southern border. Dozens of sign-waving protesters briefly ran beside her motorcade and others chanted from nearby buildings.

Melania Trump’s first trip to a Texas shelter was overshadowed by images of a jacket she wore on and off the plane, which had the words: “I really don’t care, do u?” scrawled on the back.

For her second trip, the first lady wore white flowing pants with thin black piping along the legs and a plain, fitted black T-shirt with three-quarter length sleeves.

Melania Trump had urged her husband to change his approach after images of distraught immigrant children dominated headlines and drew condemnation in the United States and around the world.

Donald Trump bowed to pressure and ordered families to be held together. More than 2,000 children remain in detention centers and foster homes, and a U.S. court has given the government 30 days to reunite all families.

Back in Washington, nearly 600 protesters were arrested during an occupation of a U.S. Senate office building where they decried Donald Trump’s “zero-tolerance” stance on illegal immigration.

“She’ll continue to give her husband her opinion on what her thoughts are on family reunification,” her spokeswoman Stephanie Grisham told reporters traveling on her plane.

In Tucson, Melania Trump met with border patrol agents and toured prison-like cells holding immigrants on a military base, usually for a few days after they are first caught crossing the border.

Later in Phoenix, she toured a shelter for 121 children aged from a few months to 17 years, some with babies of their own. Most of the children had been separated from their families.

In Phoenix, she said “Hola!” and gave high-fives to 5-year-olds gluing construction-paper shapes to make pictures of dogs.

“This is beautiful,” she said to a 5-year-old girl with a ribbon tied to her ponytail. “Do you like it here? Have you met some friends?”

In a second classroom, she chatted with 10 children ages 5 to 7 who were circling pennies and dimes on a worksheet as they learned about currency. Behind them was a bright red phone booth used for making calls to family.

She also visited a nursery where nine infants and toddlers – four of whom were there with their teenaged mothers – played and napped.