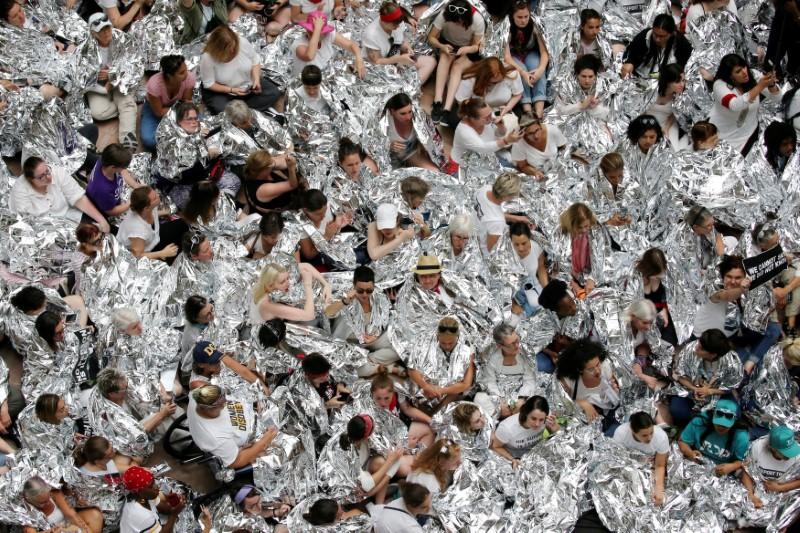 WASHINGTON (Reuters) – Nearly 600 protesters were arrested during a clangorous occupation of a U.S. Senate office building in Washington on Thursday, where they decried U.S. President Donald Trump’s “zero- tolerance” stance on illegal immigration.

The protesters, mostly women dressed in white, sat on the Hart Senate Office Building’s marbled floors and wrapped themselves in metallic silver blankets similar to those given to migrant children separated from their families by U.S. immigration officials.

Their chant “Say it loud, say it clear, immigrants are welcome here” echoed through the building, drawing scores of Senate staff to upper mezzanine floors from where they watched the commotion.

Capitol Police warned protesters that if they did not leave the building they would be arrested. Soon after, protesters were lined against a wall in small groups and police confiscated their blankets and signs.

It took police about 90 minutes to arrest them and end the demonstration. Congresswoman Pramila Jayapal, a Democrat, sat with the protesters and was also arrested.

Capitol Police said in a statement that about 575 people were charged with unlawfully demonstrating and they would be processed at the scene and released. They said people who were charged and fined could pay 24 hours after their arrests, but it was not clear who had been fined and how much.

Democratic senators Mazie Hirono, Tammy Duckworth, Kirsten Gillibrand and Jeff Merkley, who have been critical of Trump’s immigration policies, spoke with some of the protesters. Gillibrand held a sign that read: “End Detentions Now.”

Women’s March, a movement that began in the United States when Trump was inaugurated in 2017 and spread around the world, had called on women to risk arrest at Thursday’s protest.

Before arriving at Capitol Hill, the protesters marched down Pennsylvania Avenue, pausing to chant “Shame! Shame! Shame!” at the Trump International Hotel.

The Women’s March demonstration is part of a wave of actions against Trump, whose administration began seeking in May to prosecute all adults who cross the border without authorization.

More than 2,000 children who arrived illegally in the United States with adult relatives were separated from them and placed in detention facilities or with foster families around the United States.

The policy led to intense criticism in the United States and abroad, and Trump signed an executive order that would let children stay with their parents as they moved through the legal system, drawing renewed criticism.

Loretta Fudoli took a bus to Washington from Conway, Arkansas, to join Thursday’s protest. She said she had been arrested at demonstrations three or four times since she became politically active after Trump’s election.

“Their parents shouldn’t even be locked up,” Fudoli said. “This is not a bad enough crime to lock them up and take their children away.”

Most of the children separated from their families before the order was signed have not yet been reunited with them.

The White House has said that the order was not a long-term solution and has called for Congress to pass immigration reform.