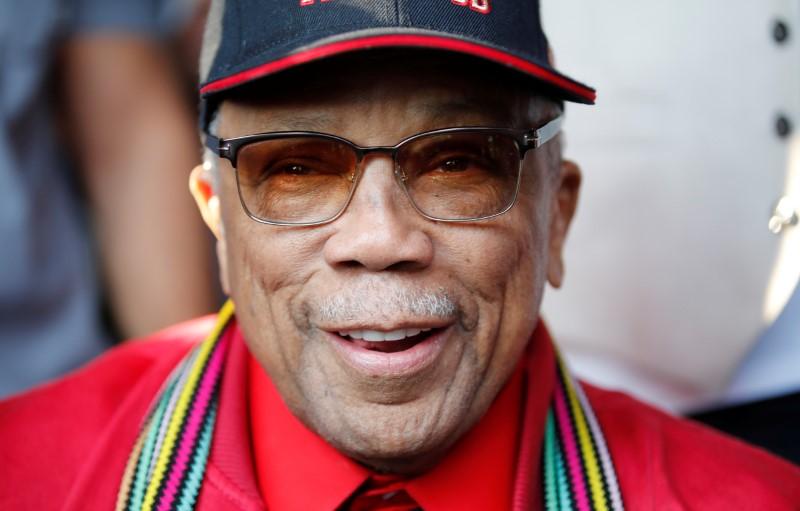 MONTREUX, Switzerland (Reuters) – Quincy Jones, the legendary American music producer, was honored on Friday at the Montreux Jazz Festival, the annual event where he served as co-director in the 1990s and continues to be a regular feature.

Legendary American producer Quincy Jones poses during a ceremony to rename a concert hall to his name and celebrate his 85th birthday during the opening night of the 52nd Montreux Jazz Festival in Montreux, Switzerland, June 29, 2018. REUTERS/Denis Balibouse

Jones, 85, received a medal and silver plaque from the Swiss lakeside city stating that a hall had been renamed after him as the two-week festival kicked off with a concert by John Cale.

“Man, it sure feels be good to be back in my second home. It feels like family, it is family,”, Jones, who has 27 Grammys, told the crowd at the House of Jazz, a new venue for 600.

“My soul is smiling,” he said, sporting a blue baseball cap marked ‘University of the Hood’, while seated after being escorted into the room in a wheelchair.

“Montreux has always been the Rolls Royce of all festivals, I tell everybody in the world,” Jones said.

Jones – producer of Michael Jackson’s best-selling album ‘Thriller’ in 1982 – served as co-producer with festival founder Claude Nobs from 1991-93, bringing Miles Davis and others to the famed stage.

“He is a great ambassador of jazz music,” festival director Mathieu Jaton told the audience.

Laurent Wehrli, mayor of Montreux, told Jones: “For your information, we have not given a medal like this in 10 years. Claude has his medal too.”

Jones is due to host an evening for jazz aficionados on July 8 with musicians including Robert Glasper, followed by a late-night jam session expected to go on into the early hours.