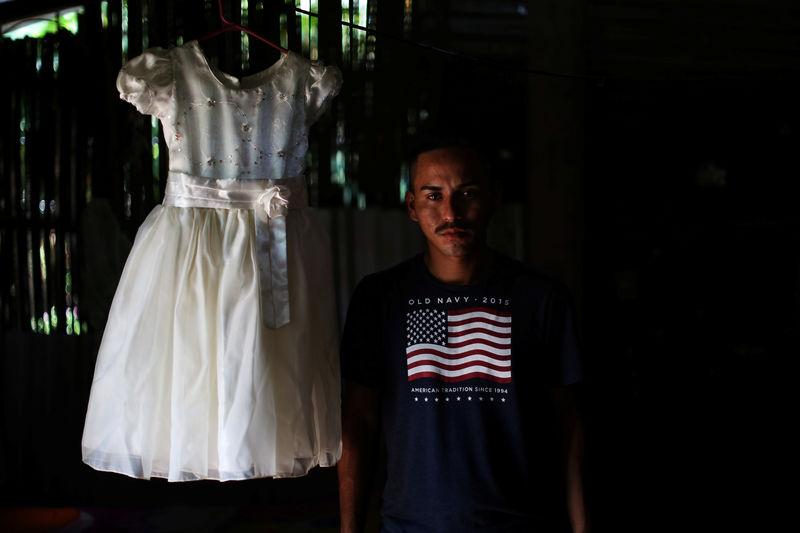 SAN LUIS TALPA, El Salvador (Reuters) – Salvadoran fisherman Arnovis Guidos was reunited with his six-year-old daughter late on Thursday a month after the girl was taken from him by U.S. authorities, leaving him with no idea where she was.

Deported from the United States last week, the 26-year-old Guidos said he was detained with his daughter Meybelin a day after crossing the U.S.-Mexico border on May 26.

The two were promptly separated by U.S. officials, and he did not discover where she was again until he was back in his violent, impoverished homeland, which he said he had fled with her because of death threats from the notorious Barrio-18 gang.

Guidos told reporters both he and his daughter felt relieved to be back together again, though he left quickly from the airport in San Luis Talpa, south of San Salvador.

The girl left by a separate exit, and Guidos said authorities had recommended that she not speak to the media.

Frustrated that immigrants from Central America were often released into the United States to await court hearings, U.S. President Donald Trump implemented a “zero tolerance” policy in April seeking to prosecute all adults who entered illegally.

That included those traveling with children, dramatically increasing the number of families separated at the border.

Trump reversed course last week, ordering an end to the separations. But the government still had 2,047 children in custody as of Tuesday, a senior official said.

Guidos was accompanied by relatives bearing “welcome home” signs and gifts for the girl, who had spent the past month in a detention center in Phoenix, according to her father.

Menaced by Barrio-18 and rival outfit Mara Salvatrucha, or MS-13, El Salvador is one of the most violent countries in the world. Thousands of Central American migrants seeking to enter the United States say they must flee or risk violent death.

Increasing numbers seek asylum in the United States, but that has become tougher under the Trump crackdown.