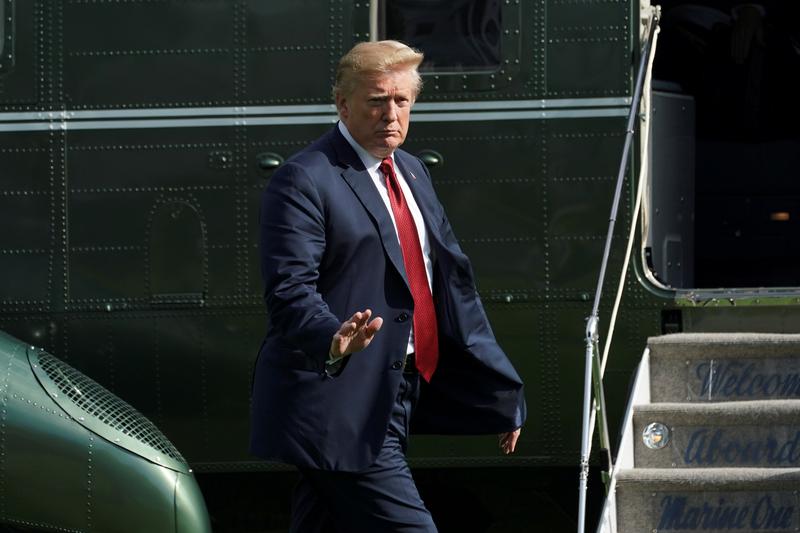 ABOARD AIR FORCE ONE (Reuters) – U.S. President Donald Trump said on Friday he plans to announce his nominee to replace retiring U.S. Supreme Court Justice Anthony Kennedy on July 9, and that he has narrowed his list of candidates.

U.S. President Donald Trump waves as he walks on the South Lawn of the White House upon his return from Mount Pleasant, Wisconsin, to Washington, U.S., June 28, 2018. REUTERS/Yuri Gripas

“I’ve got it down to about five,” Trump said, including two women.

He would not identify the candidates by name. “It’s a great group of intellectual talent … they are generally conservative,” Trump said.

Speaking to reporters aboard Air Force One en route from Washington to his private golf club in New Jersey, Trump said he may interview two contenders for the nomination this weekend.

Trump said he not will push the candidates to say whether they would overturn the 1973 Roe v. Wade decision, which established a woman’s right to abortion.

“That’s not a question I’ll be asking,” he said.

He also said he would not discuss gay rights with the candidates, and that he might interview as many as seven people.

While Kennedy was a conservative, he proved to be a somewhat unpredictable “swing” vote over his long career. For example, he sided with the court’s liberals by voting in favor of abortion rights and gay rights in key cases. Views on abortion was expected to be one that senators will ask the new nominee about in confirmation hearings, even if the president does not.

Trump’s nominee must win confirmation by the Senate. Republicans control the chamber but only by a slim majority, making the views of moderates, including some Democrats, important.

Senate Republican leader Mitch McConnell said on Friday he hoped the confirmation process would be done “in time for the new justice to begin the fall term of the Supreme Court … the first Monday in October.”

White House aide Marc Short said on MSNBC that the White House hoped for a Senate confirmation vote in September.

That would put a new justice in place before the congressional midterm elections in November, when all seats in the House of Representatives and a third of those in the Senate will be contested.

Trump met on Thursday with senators from both parties at the White House to discuss the court vacancy created by the retirement of Kennedy, which was announced on Wednesday.

Kennedy’s replacement could cast a deciding vote on limiting or ending the right to abortion.

“I do not apply ideological litmus tests to nominees, but I want to see integrity, intellect, a respect for precedent and adherence to the rule of law,” moderate Republican Senator Susan Collins told Reuters when asked about Roe v. Wade.

Democrat Bill Nelson, asked by reporters if a nominee’s views on Roe v. Wade will be important to him, said, “very.”