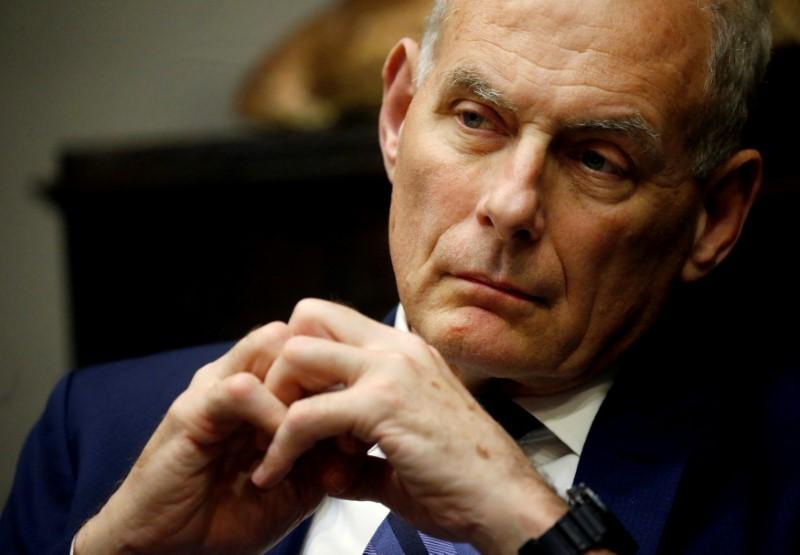 ABOARD AIR FORCE ONE (Reuters) – U.S. President Donald Trump said on Friday he is not looking for a new chief of staff to replace John Kelly but at some point, “things happen.”

Kelly, a retired general, is nearing a year in the job and could be leaving soon, a source familiar with the situation said on Thursday.

Asked if he was looking for a new chief of staff, Trump said: “No. No. We’re getting along very well… Look, at some point, things happen. But I will tell you… we have a very good relationship.”

Trump, who spoke to reporters as he traveled aboard Air Force One to New Jersey, said he did not how long Kelly would stick around.

“That I don’t know. I mean, I can’t tell you that. But I can say that we’ve had a very good relationship, and we’ve achieved a lot together. So I love John a lot. I like him and I respect him,” Trump said.

Among possible choices to replace Kelly are Mick Mulvaney, who is the White House budget director and a former member of the U.S. House of Representatives, and Nick Ayers, who is Vice President Mike Pence’s chief of staff, the source said.

Trump has occasionally chafed at restrictions Kelly has placed on who gets access to see the President and has wondered aloud whether he needs someone with more political experience for the job as congressional elections approach, two sources said.

But he frequently praises Kelly publicly and has expressed admiration of him.

Kelly was picked as chief of staff last summer to bring order to the West Wing in place of Reince Priebus, the former chairman of the Republican National Committee who presided over the chaotic early months of the Trump presidency.