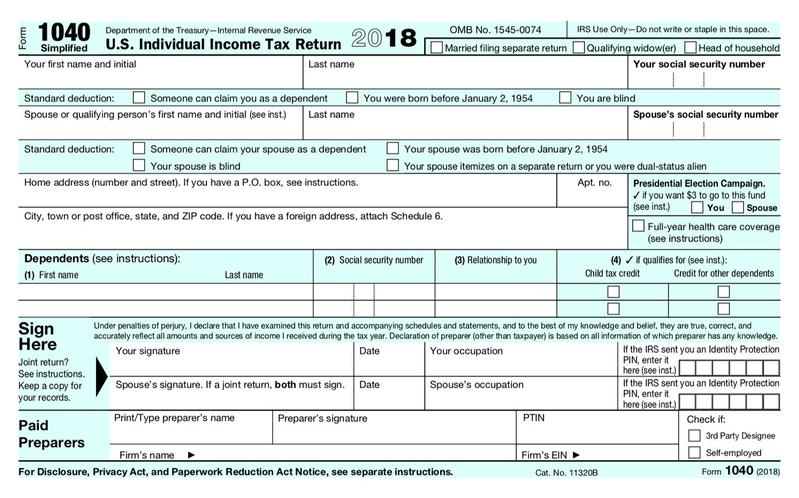 WASHINGTON (Reuters) – Sticking to a pledge that Americans will be able to file tax returns on a postcard under President Donald Trump’s tax code overhaul, the U.S. Treasury Department released a new Form 1040 for individuals on Friday, but met swift Democratic criticism about its potential complexity.

The new Form 1040 tax form for individuals, released by U.S. Treasury Department, is shown in this handout image obtained June 29, 2018. Department of the Treasury/Handout via REUTERS

The Treasury and Internal Revenue Service unveiled a draft of the new form, saying it would work with the tax community over the summer to finalize what they called a “postcard-size” document meant to be used by 150 million individual U.S. taxpayers.

“The new, postcard-size Form 1040 is designed to simplify and expedite filing tax returns, providing much-needed relief to hardworking taxpayers,” Treasury Secretary Steven Mnuchin said in a statement. The form is intended to replace three versions of the current 1040 form.

Trump’s deficit-financed tax overhaul, which delivered $1.5 trillion in tax cuts to businesses and individuals over the next decade, was expected to simplify filing by reducing the number of taxpayers with returns claiming deductions for mortgages, investment income and other items.

The law doubled to $24,000 the amount of income that a married couple can exclude from their taxes.

But Democrats warned that the new form requires taxpayers to include the same amount of tax math in a smaller space, saying individuals will have to rifle through complicated instructions and attach multiple documents.

“The administration’s new tax form is a smokescreen designed to conceal paperwork, additional calculations and Trump’s broken promise to simplify the tax code,” Senator Ron Wyden, the top Democrat on the tax-writing Senate Finance Committee, said in a statement.