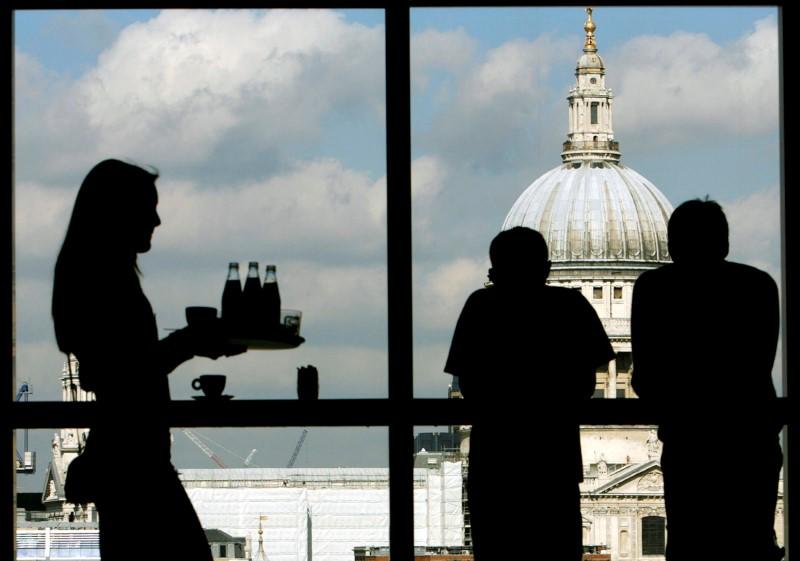 LONDON (Reuters) – Britain looks closer to shrugging off a weak start to 2018 that has kept Bank of England interest rates on hold, after official figures showed the services sector gathered steam in April and first-quarter economic growth was faster than thought.

However the outlook for growth remains modest, as businesses and households grapple with the uncertain impact of Britain’s departure from the European Union in less than a year.

Services output, which makes up four-fifths of Britain’s economy, rose by 0.3 percent in April, its fastest pace since November 2017, the Office for National Statistics said.

Compared with a year earlier, services output was 1.6 percent higher, picking up speed from the first quarter when it grew at an annual rate of 1.2 percent.

Sterling rallied against the dollar and the euro after the data, and interest rate futures priced in a roughly 60 percent chance of an August rate rise by the BoE, up from 50 percent before.

Britain’s economy as a whole grew 0.2 percent on a quarterly basis in the first three months of 2018, when the country was beset by unusually icy weather, an unexpected upward revision from an initial estimate of 0.1 percent.

The ONS said the construction sector had shrunk less than it first thought, after carrying out a major review of its methods that should lead to smaller data revisions in future.

“The barriers to an August rate rise have come down as a result of this release,” Investec economist Philip Shaw said. “In terms of the dynamics of how Q2 growth is playing out, it looks better than previously.”

On the year, Q1 GDP growth was unrevised at 1.2 percent, its weakest annual expansion since Q2 2012 and less than half the rate of growth in the euro zone over the same 12-month period.

During the early part of the year, Britain was hit by heavy snow, on top of a squeeze on consumers from inflation caused by a weak pound and many businesses’ reluctance to invest while the exact terms of Brexit remain unclear.

No interim deal has been finalised with Brussels ahead of Britain’s departure from the EU in March 2019, and UK ministers have yet to agree exactly what longer-term relationship they want with Britain’s biggest trade partner.

Households funded increased spending earlier this year by reducing the amount they save, and Friday’s data showed household savings ratios falling to 4.1 percent, the third-lowest level since records began in 1963.

Other surveys have shown households want to save more, so future spending growth may be limited, even if falling inflation reduces the squeeze on household disposable income.

Nonetheless, the Bank of England predicts quarterly GDP growth will rise to 0.4 percent in the three months to June, as the economy rebounds from February and March’s snow.

Investec’s Shaw said this still looked realistic after the latest data, and most economists polled by Reuters expect the BoE to raise rates, for only the second time since the 2008 financial crisis, after its next rate meeting in August.

As a share of GDP, this amounts to 3.4 percent, its lowest in a year, though high by international standards.

On Wednesday, the BoE said Britain’s current account deficit made it vulnerable to a fall in foreign investors’ appetite for British assets, which could lead to higher borrowing costs for businesses and households.

“Sterling remains vulnerable to fall sharply in the event of another sudden deterioration in overseas investors’ perceptions of the UK economy’s outlook,” Pantheon’s Tombs said.