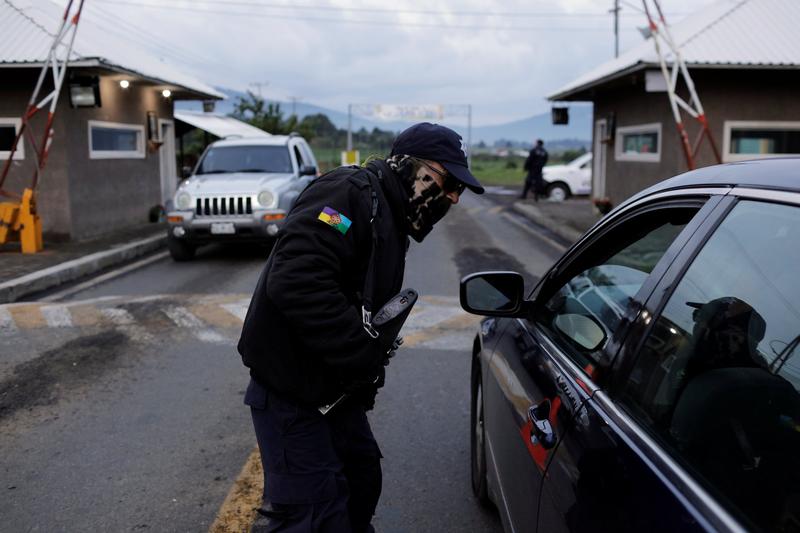 NAHUATZEN, Mexico (Reuters) – Mexican voters will stream to the polls this Sunday in a pivotal presidential contest, but leaders representing tens of thousands of indigenous people have vowed to block voting in their communities to protest a system they say has failed them.

A member of the Community Police talks to a driver at a checkpoint in the indigenous Purepecha town of Cheran, in Michoacan state, Mexico June 28, 2018. Picture taken June 28, 2018. REUTERS/Alan Ortega

Polls say Mexico is on the verge of electing its first leftist anti-establishment president in modern history, Andres Manuel Lopez Obrador. But the prospect of change has failed to resonate with inhabitants of small towns nestled in the lush, wooded countryside of southwestern Michoacan state.

Residents here have destroyed campaign signs and set up blockades to prevent the government from delivering ballots. Election officials have declared 16 towns here “unviable,” and will not likely risk confrontation to force polling stations to open.

Among the no-go zones is the impoverished hamlet of Nahuatzen, where Purepecha indigenous locals grow avocados and eke out a living on tiny plots. On Thursday, several dozen men, some in cowboy hats, stood vigil near the town’s entrance. They had laid a tree trunk across the road to stop outsiders from entering.

“The politicians haven’t done anything besides enrich themselves and they’ve left us behind,” said Antonio Arriola, a member of a recently-created indigenous council that has petitioned the Mexican government for autonomy.

After word spread on Friday that local party bosses may try to deliver ballots in their personal cars, indigenous leaders said they would use bulldozers to dig a trench in the main road to strengthen their blockade, a tactic already employed in a nearby town.

Arriola and other local leaders grudgingly acknowledged some common ground with Lopez Obrador, the 64-year-old former Mexico City mayor who got his start in politics decades ago advocating for indigenous rights.

But Arriola said the Purepecha have learned the hard way not to pin their hopes on promises coming from politicians, even ones that purport to have their best interests in mind.

“Our roads, schools and health care have been in the gutter for more than 40 years,” he said.

Nahuatzen is part of a growing movement among Mexico’s indigenous communities, who are seeking self-rule and turning their backs on mainstream elections.

Dissent in Michoacan ignited seven years ago, ahead of the 2012 presidential election, when just one jurisdiction, the municipality of Cheran, opted out of voting. This year, the boycott spread to six additional municipalities affecting dozens of polling stations across the 16 towns, home to at least 50,000 voters.

Agitation has likewise spread to traditional Maya communities in the southern Mexican states of Chiapas and Guerrero.

Indigenous leaders in at least six towns and small cities in those states are also pledging to block balloting on Sunday. That could impact tens of thousands more voters.

Electoral authorities may set up polling stations outside towns that have rejected them, allowing those who want to vote to do so, said Erika Barcenas, a lawyer based in Morelia, Michoacan’s capital, who advises communities that want more autonomy.

“But I think the view of the majority is a more global rejection, a rejection of political parties and of the kind of democracy we have right now,” she said.

The growing complaints of indigenous Mexicans appear to track a broader restlessness in the country, where widespread political corruption, drug violence and entrenched poverty have fueled discontent.

Support for democracy among Mexicans plummeted from slightly more than 70 percent in 2004 to just under half last year, according to data from the Latin America Public Opinion Project.

A member of the Community Police gestures to a driver at a checkpoint in the indigenous Purepecha town of Cheran, in Michoacan state, Mexico June 28, 2018. Picture taken June 28, 2018. REUTERS/Alan Ortega

Resistance to far-away masters goes back centuries for the Purepecha of Michoacan. Known for their fierce independence and closely guarded metal-smelting skills before the Spanish conquest of 1521, they were one of the few kingdoms in central Mexico that Aztec armies never subdued, despite repeated attempts.

On a federal highway near the town of Zirahuen, about 22 miles (35 km) southeast of Nahuatzen, several hundred locals set up another blockade with a big yellow truck, cutting off transit in both directions.

Many in the crowd said they were determined to repel any attempt by election authorities to deliver ballots or set up polling stations.

As of Friday evening, authorities had made no such efforts.

Young indigenous men in baseball caps walked down long lines of idled vehicles, telling drivers if they wanted to pass they must remove any visible campaign advertising. In a couple of instances they peeled political party stickers from windshields.

But the cradle of Michoacan’s movement is Cheran, home to 18,000 mostly Purepecha residents. The municipality proudly displays it indigenous heritage on its police vehicles, where the town’s name is written in the indigenous language, rather than Spanish.

Anger over widespread illegal logging believed to be organized by drug gangs sparked the unrest in Cheran. Outraged residents expelled their mayor and the local police force, whom they accused of being complicit. In 2012, citizens began to set up a new governing council based on indigenous customs.

Pedro Chavez, president of Cheran’s indigenous governing council, said he is pleased that the movement has expanded yet again during this presidential election year.

“We can be an inspiration for free self-determination and a lesson about the rights of native peoples,” said Chavez, speaking outside his nearly-completed traditional wood-plank home.

The rights of Mexico’s indigenous poor last commanded the nation’s attention just after the North American Free Trade Agreement (NAFTA) went into effect in 1994 and the Zapatista National Liberation Army issued a “declaration of war” against the government.

“Free determination (for indigenous communities) is something that’s now being discussed for the first time since the Zapatista revolt,” said Barcenas, the attorney.

Some election officials say a solution to rising resistance among indigenous communities lies in more local control over public finance.

“We think the crux of their struggle is the push for direct funding to address the marginalization these communities face,” said David Delgado, the national electoral institute’s delegate for Michoacan.

Marco Banos, an official with the national electoral institute, said Mexico needs to find ways to fuse indigenous customs with the country’s existing election laws in communities where resistance to voting is playing out.

Still, he said resistance to voting is not as widespread as activists assert.

But, in Arantepacua, another restive Michoacan community which is boycotting the election, Dionisio Lopez said he is finished casting ballots.

“It’s all one big mafia. We having nothing but pure corruption here in Mexico and it’s proven,” he said. “Why pretend otherwise?”

(This story corrects name to Pedro Chavez, not Pablo Chavez in 26th paragraph.)