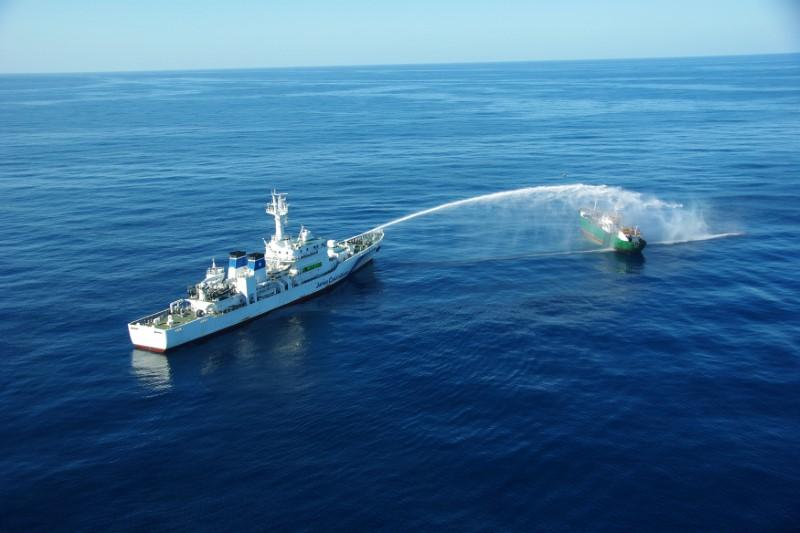 SAKATA, Japan (Reuters) – U.S. President Donald Trump has declared North Korea is no longer a threat, but that doesn’t make the Japanese fishermen of Sakata feel any easier as they leave port for the peak fishing season.

An aerial view shows a Japan Coast Guard patrol vessel spraying water at a fishing boat from North Korea, in an area called the Yamato Shallows, where in waters Japan says is part of its exclusive economic zone (EEZ), about 400 kilometers off the western coast of Japan, in this handout photo taken in September 2017 and provided by Japan Coast Guard. Japan Coast Guard/Handout via REUTERS

Instead, they worry they will have to confront North Korean fishing boats competing for their prized catch of squid in the fertile waters of the Yamato Shallows, 400 kilometres (250 miles) off Japan’s northwestern coast and an area Tokyo says is its exclusive economic zone.

In a ceremony marking the start of the fishing season this month, captains of Sakata’s fleet prayed for a safe fishing season and plentiful harvest. Children threw colorful ribbons onto ship decks as crewmen waved to their families from departing ships.

Relatives and crew members of squid fishing ship Hosei-Maru No.58 hold small party before the departure of the ship for fishing at a port in Sakata, Yamagata prefecture, northern Japan, June 6, 2018. REUTERS/Issei Kato

“The North Koreans came so close last year that we could see their faces,” said Shigeru Saito, 60, a captain of a squid fishing ship in Sakata.

Many of the North’s boats are small and rickety compared to Japan’s bigger, modern vessels, increasing the risk of an unintentional collision, especially at night when most squid fishing takes place.

The North’s vessels began appearing some years ago in a push by Pyongyang to increase the country’s marine catch. Thousands of these wooden vessels were spotted last year in the waters.

About 70 percent of North Korea’s population of 25 million is “food insecure”, meaning they struggle to avoid hunger, according to the World Food Programme.

Analysts say the influx of North Korean fishermen may ease this year given China’s ban on fish imports from the state. But some will return, looking for ways to earn extra sources of income in a country whose economy has been squeezed by international sanctions over its nuclear weapons development.

“The only thing Japan can do now is to prevent North Korean fishing ships from entering and for the Japanese Coast Guard to continue to use methods such as spraying water to keep them out,” said Satoru Miyamoto, a professor in the political science and economics department at Seigakuin University in Saitama in Greater Tokyo.

A Coast Guard spokesman said that as of June 1, its ships had ordered 112 North Korean vessels to leave the Yamato Shallows and had used water spray to disperse 19 vessels.

But fishermen say they want Japan to take more aggressive steps, such as arresting North Korean fishermen, whom they call poachers, to secure their fishing grounds.

“I’m sure it’ll be the same again this year. Politicians may believe in North Korea, but I don’t trust Kim (Jong Un) and I think their fishing boats will continue to come,” said Saito.