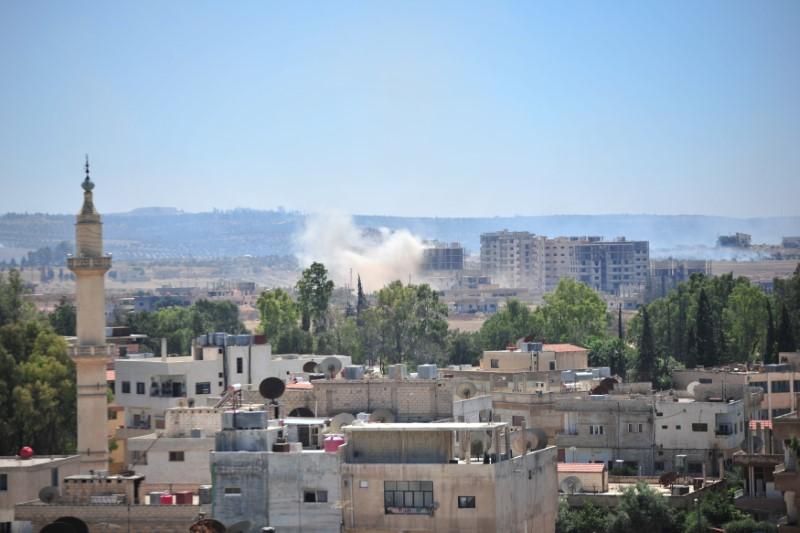 AMMAN (Reuters) – The Syrian opposition began negotiations with Russian officers about an agreement to restore state sovereignty over rebel-held parts of the southwestern Deraa province, rebel negotiators said on Saturday.

Smoke rises from the southeast part of Deraa, Syria in this handout released on June 27, 2018. SANA/Handout via REUTERS

The government’s offensive this month in southwest Syria has taken much of the eastern part of Deraa province from rebels, backed by a bombardment that the United Nations says has pushed 160,000 people out of their homes.

Insurgent negotiators and a spokesman said a six-member civilian and military committee of the southern rebels held a preliminary meeting along the administrative borders of neighboring Sweida province.

“The committee held its first meeting with Russian officers who presented their demands,” said Ibrahim Jabawi, a spokesman of the central operations room set up by the main Free Syrian Army groups in southern Syria. A second round of talks was expected on Saturday.

The deal being discussed does not include rebel territory in adjacent Quneitra province, bordering the Israeli-occupied Golan Heights, the spokesman said.

Jordan, which borders Deraa province, has been facilitating talks between rebel factions and Moscow over a deal that would end the violence in exchange for the return of state rule there.