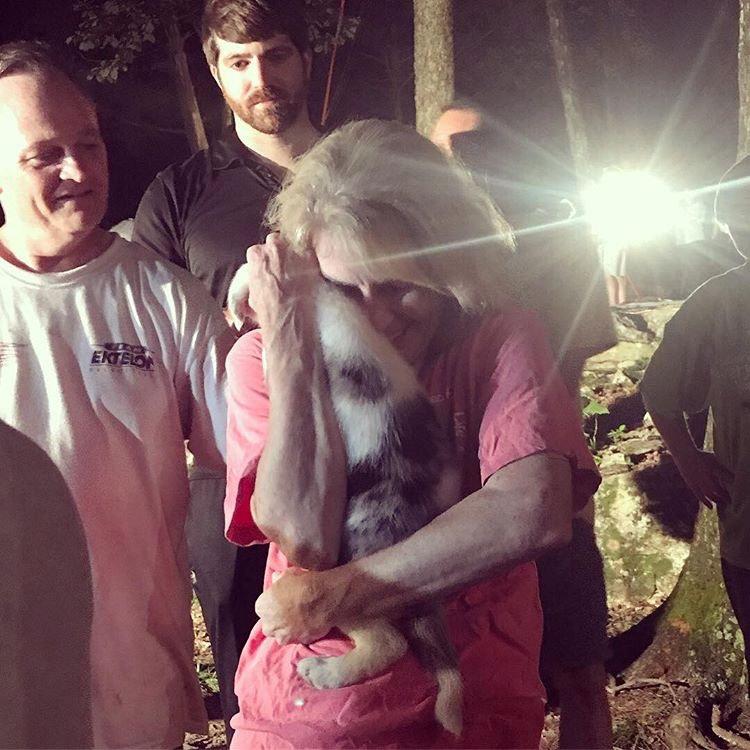 (Reuters) – Toffee has been saved.

Puppy is being lifted out of a hole and reunited with its fosterer in Huntsville, Alabama, U.S., June 30, 2018 in this picture grab obtained from social media video. Instagram/Katie Ziegler/via REUTERS

At a little passed midnight on Saturday, with the help of some sardines and a snare, volunteers lifted Toffee, a seven-week-old deaf puppy that briefly caught the nation’s attention, out of a deep hole in northern Alabama, ending a saga that began more than 30 hours earlier, local media reported.

“I still can’t believe she’s really out,” Karen Smith, the dog’s foster owner, told a local news outlet. “This is a miracle.”

Toffee fell into the hole in the backyard of her foster family’s home at about 5 p.m. local time on Thursday, setting off a vigorous efforts by the fire department, cave rescue crews and volunteers to save her.

Throughout the rescue effort, volunteers tried lowering a person down into the 50-foot (15 m) crevice before realizing the opening was only 5 inches (13 cm) wide. They also tried reaching Toffee with rope, duffle bags and a crate, all to no avail, WHNT News 19 reported on its website.

Puppy is being lifted out of a hole and reunited with its fosterer in Huntsville, Alabama, U.S., June 30, 2018 in this picture grab obtained from social media video. Instagram/Katie Ziegler/via REUTERS

During the ordeal, Toffee remained awake, eating and drinking water, according to reports from local CBS affiliate.

The longer Toffee was in the hole, the more fans she got on social media, where people from across the United States rooted for the white puppy.

“Toffee is saved!!!!! So happy they got her out of that hole! Now I can sleep tonight,” said a Twitter user who goes by the name of Jamie.

A live feed from the scene late on Friday night showed spotlights shining on more than a dozen people who huddled around the hole discussing how to rescue Toffee.

Finally, at a little after midnight on Saturday, workers lowered sardines and a snare down to Toffee and were able to hoist her up to the ground where she was meant by a loud cheer and some tears of joy.

Smith clenched Toffee after she was rescued, burying her head into her fur, footage showed.

“I still can’t believe it. I don’t want to put her down, she’s probably going to sleep in the bed with me tonight,” Smith said. “And we are going to cover that hole up.”

Reporting by Brendan O’Brien in Milwaukee, editing by Larry King