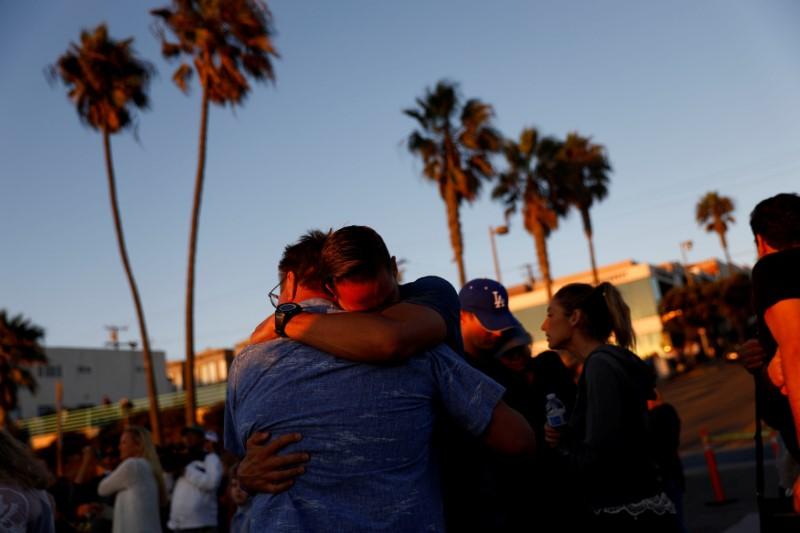 NEW YORK (Reuters) – Seventeen years after Detective Kevin Green first delivered the grim news that a loved one had been killed, the day is still vivid in his mind.

“I remember distinctly it was a Saturday, and it was around 3:50 in the afternoon,” said Green, then an East Orange, New Jersey, police detective who was about to tell a school crossing guard that her son had been shot and killed.

Green, now a homicide investigator with the Essex County, New Jersey, Prosecutor’s Office, has made hundreds of “next-of-kin notifications” since then, but they remain one of the toughest parts of his job. It never gets easier, he says.

Between mass shootings, neighborhood homicides, suicides and traffic fatalities, people like Green become messengers of death tens of thousands of times a year in the United States. It was a duty that last week fell upon first responders after a gunman killed five people at a Maryland newspaper office.

Receiving the news of a loved one’s death shatters most families, but it also takes a toll on those who deliver it.

“We won’t admit it, we won’t talk about it, but none of us sleep real good, and it weighs on you,” said Lieutenant Tom Kelly, who in his 15 years working homicide at the Essex County Prosecutor’s office has supervised hundreds of murder cases.

Complicating matters is that murders often are still unsolved when families are notified. Investigators may need to ask personal questions, such as whether the victim used drugs, at a time when loved ones are just beginning to process the news, he said.

“Sometimes we’ll let that kind of questioning go a day or two,” said Kelly, whose jurisdiction covers Newark and 20 other municipalities west of New York City.

Investigators also need to be careful not to say too much about the crime, he said, because once in a while the next of kin turns out to be the murderer.

TELL THEM BEFORE SOCIAL MEDIA DOES

Those who make death notifications, which are often required by state law, generally agree on how they must be done:

— Tell them quickly and use direct terms, such as “was killed,” not “left us.”

— Try to make the notification in the person’s home, preferably with other relatives present, not on the doorstep and not on the telephone.

— Above all, get it done before word gets out on social media or in the press.

Jersey City, New Jersey, is about to have non-religious chaplains accompany police on death notifications, something several other jurisdictions also do as a way to make the difficult police visits more compassionate.

“No matter what the police do, or what our approach is, we’re still the police,” Police Chief Michael Kelly said.

The program was developed by Paul Bellan-Boyer, director of the city’s Division of Injury Prevention, who became a chaplain a week after the Sept. 11, 2001 attacks to help notify relatives of the 2,753 who died at the World Trade Center.

Confirming people’s worst fears about their missing relatives, Bellan-Boyer said he encountered tears, rage and just blankness, and he vividly recalls the first one.

“The man was very angry,” he remembered. “His young daughter who he loved, who had a promising career, who had a future ahead of her that they all envisioned and dreamed of, was murdered.”

After 9/11, perhaps the most challenging incident for first responders happened last Oct. 1, when a heavily armed gunman in a high-rise Las Vegas hotel turned a Sunday night outdoor concert into a scene of carnage and chaos in the worst mass shooting in modern U.S. history.

It fell to the office of Clark County Coroner John Fudenberg to identify the 58 who were killed and notify their relatives.

Fudenberg credits his 25 investigators for getting it done without mistakes in a “somewhat miraculous” three days, adding that their emotionally taxing work is often under-appreciated.

“It’s probably one of the most mentally exhausting and stressful processes that a human being can do,” he said.

After 10 years on the job, Priscilla Chavez, a senior Clark County coroner investigator, says the makeup of the staff has gone from mostly male to 90 percent female. Empathizing with relatives’ pain, she says, comes more naturally for women.

By now, she says she knows what to expect when she shows up in her coroner’s uniform to announce someone’s death. But that does not make it any easier.

“You can look at their face,” she said. “You can see their eyes glance over at the logo and what it says, and then it’s either a face of curiosity or fear.”