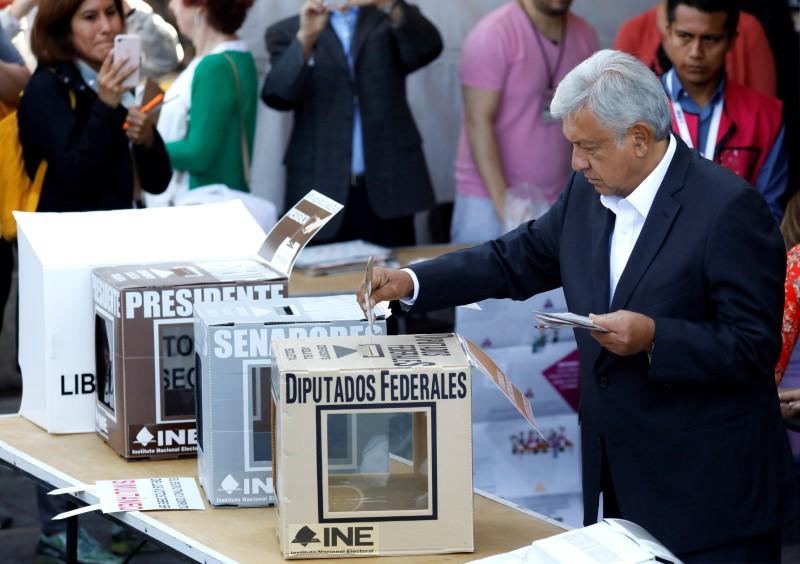 MEXICO CITY (Reuters) – Mexicans lined up to vote for a new president on Sunday with the anti-establishment outsider who is tipped to win calling for national reconciliation after a campaign in which dozens of down-ticket candidates were murdered by suspected drug gangs.

Opinion polls before the election showed a double-digit lead for Andres Manuel Lopez Obrador, a former Mexico City mayor expected to inject a dose of nationalism into government and sharpen divisions with U.S. President Donald Trump if he wins.

Lopez Obrador, 64, would be the first leftist president in decades in Mexico, Latin America’s No. 2 economy, if he ousts the ruling centrist Institutional Revolutionary Party (PRI).

Runner-up in the 2006 and 2012 elections, he pitched himself as the only man capable of cleaning up a political class whose credibility has been ground down by graft, years of subpar economic growth and soaring crime levels.

Since the race began late last year, at least 133 politicians have been murdered from all the major parties. The crimes are mostly attributed to gangs trying to influence municipal elections.

“With all my heart, I want today’s election to take place without violence,” Lopez Obrador said before voting in the south of Mexico City after a campaign marked by mud-slinging between presidential candidates over tit-for-tat graft allegations.

“As soon as the election is over, we will begin a period of national reconciliation,” said Lopez Obrador, who is known by his initials AMLO, smiling and flashing a victory sign at the polling station where he arrived 40 minutes before it opened.

Across the country, many people, waiting in the morning chill to vote at schools and community centers, said it was time to give the left a chance, and that traditional parties had failed to stem graft and bloodshed.

In addition to the political killings, Mexico suffered its most violent year in recent history in 2017, with murders unabated this year. The bloodshed is blamed on drug cartels splintering and branching out into fuel theft and extortion.

“This is our chance to bring about change in the country,” said Meinardo Perez, 25, an engineer voting for Lopez Obrador, who nonetheless recognized the candidate would struggle to keep all his promises.

“But we have to start somewhere. We need to upset things,” he added.

Lopez Obrador has spent 13 years relentlessly campaigning around Mexico but has been a divisive figure since bringing much of the capital to a standstill for weeks with demonstrations to protest his 2006 election loss. His criticism of the government’s economic agenda has been tempered by business-friendly aides.

He has played with the idea of referendums to resolve divisive issues like whether to continue with Pena Nieto’s opening of the oil and gas industry to private capital.

Rivals Ricardo Anaya, an ex-leader of the center-right National Action Party (PAN) heading a right-left alliance, and PRI candidate Jose Antonio Meade, a former finance minister, differ only in nuance in their support of the energy reform. They represent the only two parties that have ruled modern Mexico.

Their efforts to catch Lopez Obrador have been hampered by attacks on each other, and some opinion polls put his lead in excess of 20 percentage points.

The next president will inherit a simmering dispute with Trump over migration and trade, with talks to rework the North American Free Trade Agreement (NAFTA) unresolved, pressuring Mexico’s peso currency.

Trump has threatened to pitch North America into a costly trade war over NAFTA, and his insistence that Mexico pay for his desired border wall has deeply angered many Mexicans.

Lopez Obrador has moved carefully and wants to broker a deal with Trump under which Mexico would work to rein in illegal immigration in return for economic support.

How much heft he can bring to bear domestically and internationally will depend on his control of Congress, where no party has held an outright majority since 1997.

Polls suggest his National Regeneration Movement (MORENA), a party that has only existed formally since 2014, could be close to a majority. Markets may react negatively if voters give him too free a hand in Congress. [L1N1TV18T]

Many Mexicans also worry that Lopez Obrador could implement policies that deepen, rather than alleviate the country’s problems.