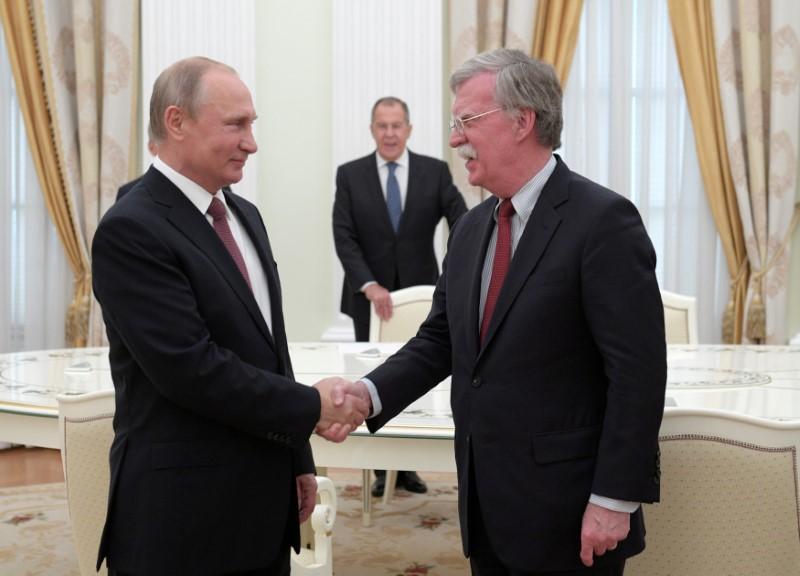 Bolton said he discussed concerns about Russian meddling in the U.S. elections with Putin during his visit to Moscow on Wednesday, citing activities targeting congressional elections coming up in November as well as the 2016 presidential contest.

“The election meddling issue was definitely something we talked about,” Bolton told the CBS “Face the Nation” program. Bolton said he brought up both the 2016 election and Russian activities in upcoming congressional elections.

Speaking about the meddling, Bolton told the “Fox News Sunday” program: “I think it’s something that we’re concerned about. That’s why the president is going to speak with him about it again.”

He said Putin told him that “there was no meddling in 2016 by the Russian state.”

Bolton said that was different from the Russians saying there was no meddling at all.

“I think the president will have to pursue that further and I think that’s one reason why he and President Putin need to have this conversation,” he said, adding that “Vladimir Putin is the one who makes the decisions and I think our leader needs to speak with him.”

Trump’s praise of Putin as a strong leader and his stated desire to forge better relations with Russia are of concern to critics. They fear he may cede too much during their first official summit on July 16 in Helsinki, Finland.

The Republican president said he would raise the issue of election meddling with Putin as well as Russia’s role in Syria and Ukraine. [nL1N1TV232]

After Trump and Putin met briefly in Vietnam in November 2017, Trump was criticized in the United States for saying he believed Putin when he denied Russian meddling.

U.S. intelligence agencies have alleged that Russian hackers had tried to help Trump win the White House, something Russia has flatly denied. Special Counsel Robert Mueller is investigating whether Trump’s campaign worked with Moscow. Trump denies any collusion and has called the probe a “witch hunt.”

Putin last month said patriotic Russian hackers may have staged cyber attacks against countries that had strained relations with Moscow and denied state intervention – a departure from the Kremlin’s previous denials of any Russian interference.

“Russia continues to say they had nothing to do with Meddling in our Election!” Trump tweeted last week.

“I’m concerned when the president tweets, you know, Russia denies they meddled in our election,” Republican U.S. Senator Lindsay Graham told NBC’s “Meet the Press” program on Sunday. “When they say they didn’t meddle, they’re lying.

“So I’m glad the president is going to confront Putin. Show him the evidence you’ve got, Mr. President, because it’s overwhelming.”

Bolton also said he discussed Russia’s annexation of Crimea with Putin and his aides during a 90-minute meeting.

“President Putin was pretty clear with me about it, and my response was we’re going to have to agree to disagree on Ukraine,” he said. “That’s not the position of the United States.”

Russia’s 2014 annexation of Crimea from Ukraine and the sanctions imposed on Russia by the United States in response, and its military intervention in the war in Syria to support President Bashar al-Assad are major causes of strain in the two countries’ relations.

Asked on Friday if the United States would recognize Crimea as part of Russia, Trump said: “We’re going to have to see.”